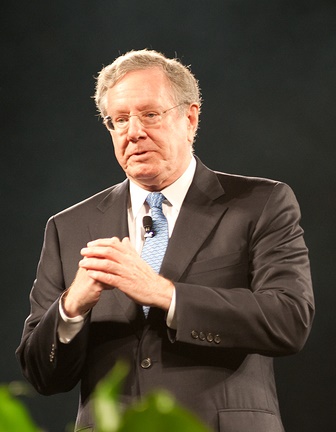 Forbes in 2009, photo by randymir/Bigstock.com

Steve Forbes is an American publishing executive, businessperson, writer, and publisher and editor-in-chief of Forbes magazine.

He was a candidate for the Republican Party’s nomination for President of the United States in 1996 and 2000.

Steve is married to Sabina Beekman, with whom he has five children, including journalist Moira Forbes.

Steve’s paternal grandfather was Bertie Charles “B. C.” Forbes (the son of Robert Forbes and Agnes Moir). B. C. was born in New Deer, Aberdeenshire, Scotland, the son of a storekeeper and tailor, and moved to New York City, U.S., c. 1904-1906. Robert was the son of Alexander Forbes and Jean/Jane McConachie or Elizabeth Anderson. Agnes was likely the daughter of John/James Moir and Agnes Duncan.

Steve’s maternal grandfather was Robert Remsen Laidlaw (the son of Henry Bell/Bedell Laidlaw and Elizabeth Carter Onderdonk). Robert was born in New York. Henry was the son of Robert Laidlaw, who was Scottish, and of Hulda Bell. Elizabeth was the daughter of John Remsen Onderdonk and Sarah Trask. John’s uncles were Henry Onderdonk, the second Episcopal bishop of Pennsylvania, and Benjamin T. Onderdonk (Benjamin Treadwell Onderdonk), the Bishop of the Episcopal Diocese of New York, from 1830 to 1861.

Steve’s maternal grandmother was Isabella Wood (the daughter of Henry Raynor Wood and Anna/Anne/Annie Carter). Isabella was born in Ohio. Henry was the son of Julius J. Wood and Charlotte Brown. Anna was the daughter of Francis Carter and Margaret Reed.

Genealogy of Steve Forbes (focusing on his father’s side) – https://www.wikitree.com