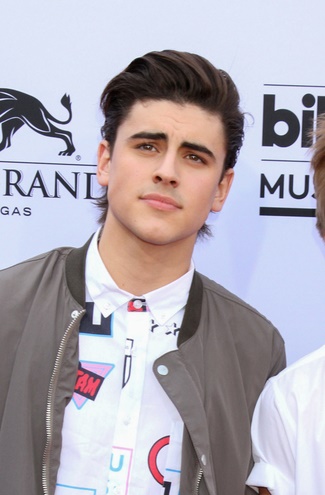 Gilinsky in 2015, photo by Prphotos

Jack Gilinsky is an American singer. He is part of the pop-rap duo Jack & Jack, along with Jack Johnson. He has also been part of The Omaha Boys, with Johnson, Skate, and Sam Wilkinson.

Jack’s patrilineal line can be traced to Enoch Galinski, who was born c. 1774.

Jack’s paternal grandfather is Larry Gilinsky (the son of Stewart Harold Gilinsky and Frances “Chickie” Bergman). Stewart was born in Iowa, the son of Israel/Ike Gilinsky and Anna Wattenburg/Waltenberg, who were born in Iowa and Nebraska, respectively, and all of his own grandparents were Czech Jewish immigrants, also with roots in Lazdijai, Lazdijai District Municipality, Alytus County, Lithuania. Jack’s great-grandmother Frances was born in Nebraska, of Polish Jewish, German Jewish, and Czech Jewish ancestry, and was the daughter of Clarence Loeb Bergman and Lillian Weinberg.

Jack’s paternal grandmother is Deanna Sue Dworkin (the daughter of Edward Dworkin and Eunice Miller). Edward was born in Kansas City, Missouri, to a Russian Jewish father, Samuel L. Dworkin, with roots in Novgorod Oblast, and a Lithuanian Jewish mother, Rose Lea Rudnick, from Vishay. Eunice was the daughter of Joseph Miller and Celia Snitz, who were Russian Jews. She had roots in Moheilof.

Jack’s maternal grandfather is Frank Finnegan (the son of Frances Schroepfer). Frances was the daughter of Frank Schroepfer and Jane Spencer; Jane was born in Illinois, to English parents.