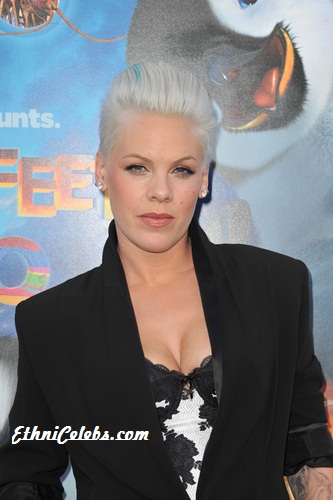 Pink, also known as P!nk, is an American singer, songwriter, dancer, and actress.

Pink is the daughter of Judy (Kugel), a nurse, and Jim Moore, a Vietnam War veteran. Pink’s father has Irish, German, English, and a small amount of French, ancestry. Pink’s mother is from an Ashkenazi Jewish family (from Bohemia, Russia, and Lithuania). Pink was raised in a secular household. She has referred to herself as Jewish.

Pink grew up in Doylestown, Pennsylvania. She is married to professional motocross racer Carey Hart, with whom she has two children. Pink is a vegetarian and an animal rights activist. She is also involved in other charities and organizations.

Sources: A discussion of the ancestry of Pink, and of her husband, Carey Hart, by Megan Smolenyak Smolenyak, at The Huffington Post – http://www.huffingtonpost.com