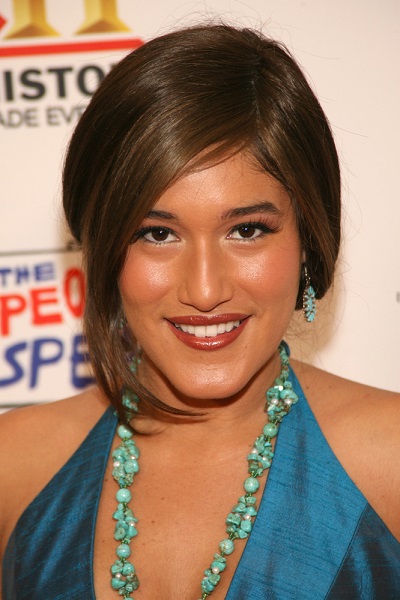 Kilcher in 2009, photo by Prphotos.com

Q’orianka Kilcher is an American actress, singer, and activist. She is known for playing Pocahontas in the 2005 film The New World, and for her roles in the films Princess Kaiulani, Ben & Ara, Sky, The Vault, Dora and the Lost City of Gold, and Color Out of Space, and on the show Yellowstone.

Q’orianka’s father, Wachan Bajiyoperak Vega, who is from Peru, is of Quechua-Huachipaeri Indigenous descent. Her name, Q’orianka, means Golden Eagle in Quechua.

Q’orianka’s mother, Saskia Kilcher, is a human rights activist. Saskia was born in Alaska and raised in Switzerland, and is of Swiss-German and Swiss-French descent. Q’orianka is a first cousin, once removed, of singer Jewel. Q’orianka’s maternal great-grandparents, Yule Julius Jacob Kilcher and Ruth Helen Weber, were also Jewel’s paternal grandparents.

Her brothers, Kainoa Kilcher and Xihuaru Kilcher, have also acted.

When Q’orianka was two years old, she and her mother moved to Kapaa, Hawaii.

Q’orianka’s maternal grandfather was named Ray “Pirate” Genet. Ray was a famous mountaineer, who was from Lake Geneva, Switzerland.

Q’orianka’s maternal grandmother was Wurtila Dora Kilcher (the daughter of Yule Julius Jacob Kilcher and Ruth Helen Weber). Yule was born in Laufen, Canten of Basel, Switzerland, of Swiss-German descent, and was the son of Edwin Otto Kilcher and Lina Alter. Yule was a state legislator and delegate to the Alaskan Constitutional Convention. Ruth was born in Pretteln, Basel Country, Liestal, Switzerland, and was also of Swiss-German descent.

Genealogy of Q’orianka Kilcher (focusing on her mother’s side) – http://www.geni.com