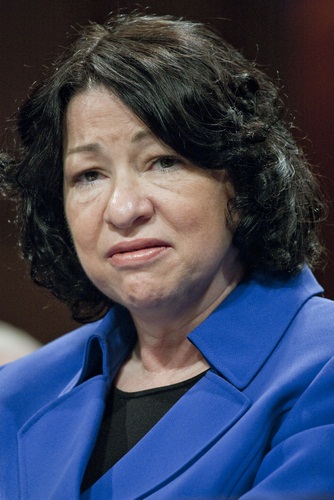 Sonia Sotomayor has served as an Associate Justice of the Supreme Court of the United States, since August 8, 2009. She was previously a Judge of the U.S. District Court for the Southern District of New York, from August 12, 1992 to October 7, 1998, and a Judge of the U.S. Court of Appeals for the Second Circuit, from October 7, 1998 to August 6, 2009.

Justice Sotomayor was born in The Bronx, New York City, New York, to Puerto Rican parents, and grew up in the large Puerto Rican community in the Bronx. Her father, Pedro Juan Sotomayor, was from the Santurce area of San Juan, and was a tool-and-die worker. Her mother, Celina/Eselina (Báez), was from Santa Rosa, in Lajas, and was a telephone operator and practical nurse. Her mother was an orphan, and served in the Women’s Army Corps during WWII. She was raised in the South Bronx and East Bronx.

Justice Sotomayor is a Roman Catholic.

She is widely regarded as the first Hispanic Justice on the United States Supreme Court, although Benjamin N. Cardozo could be considered the first (he was of Sephardi Jewish descent).

Justice Sotomayor’s paternal grandmother was Mercedes López Genaro (the daughter of Benigno López Cortés and Siriate Genaro Correa). Benigno was the son of Juan Eufemio López and Ricarda Cortés. Siriate was the daughter of Andrés Genaro and Francisca Correa.

Justice Sotomayor’s maternal grandfather was Agustin Baez Ortiz (the son of Antonio Baez and Juana Ortiz). Juana was the daughter of Jose Ortiz.

Justice Sotomayor’s maternal grandmother was Aurelia Francisca Toro Torres (the daughter of Juan Pilar Toro and Dolores Torres). Aurelia was born in Lajas. Juan was the son of Jose Toro and Vicenta Martinez. Dolores was the daughter of Juan Bautista Torres and Maria Velez.