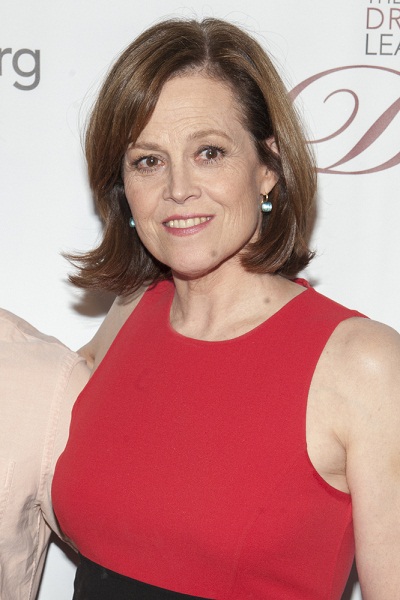 Sigourney Weaver is an American actress and producer. Her many roles include the Alien films, Gorillas in the Mist, Working Girl, Galaxy Quest, and Dave.

She is the daughter of television executive Sylvester Weaver (Sylvester Laflin “Pat” Weaver, Jr.) and actress Elizabeth Inglis (born Desiree Mary Lucy Hawkins). Her father served as President of NBC, and created its Today show. He has been credited with reshaping commercial broadcasting’s format and philosophy in the 1950s. Her uncle (father’s brother) was actor, comedian, and musician Doodles Weaver. She is approximately 5’11”.

Sigourney’s mother was English, and was born in Colchester, Essex, England. Sigourney’s father was American, and had mostly English, some German and Scottish, and a smaller amount of Dutch, ancestry. Her paternal four times great-uncle, Matthew Laflin, founded the Laflin & Rand Powder Company.

Sigourney is married to theatre and film director Jim Simpson, with whom she has a daughter.

Sigourney’s paternal grandmother was Amabel/Mabel/Anabel/Idabel/Isabel Dixon (the daughter of James Hardin Dixon and Mary Caroline “Callie” Huffer). Amabel was born in Monroe, Iowa, to parents who were born in Lima, Allen, Ohio. James was the son of Samuel Dixon and Mary. Sigourney’s great-grandmother Mary was of German descent, and was the daughter of John D. Huffer and Susan Marie Clippinger.

Sigourney’s maternal grandfather was Alan George Hawkins (the son of Charles Hawkins and Ellen Goulder). Alan was born in Downham Market, Norfolk, England. Charles was the son of Thomas Hawkins and Maria Boby. Ellen was the daughter of Samuel Goulder and Marianne.

Sigourney’s maternal grandmother was Margaret Inglis Hunt (the daughter of Edgar Atlee Hunt and Charlotte Mary Bawtree). Margaret was born in Colchester, Essex, England. Edgar was the son of Josiah Hunt and Barbara Anne Cope. Charlotte was the daughter of John Bawtree and Helen Inglis.

Genealogy of Sigourney Weaver (focusing on her father’s side) – https://www.wikitree.com

Genealogy of Sigourney’s father (focusing on his father’s side) – https://www.ancestry.com

Interview with Sigourney Weaver at The Daily Mail – http://www.dailymail.co.uk