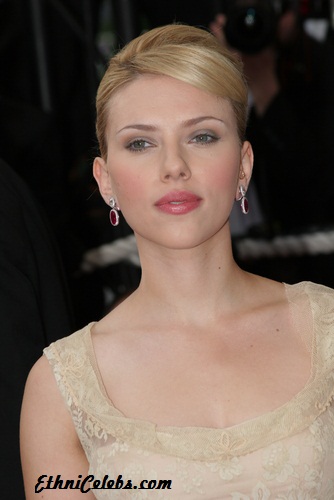 Scarlett Johansson is an American actress, singer, model, and director. She is known for starring in the films Lost in Translation, Match Point, Lucy, Marriage Story, The Man Who Wasn’t There, In Good Company, and The Spirit, among many others. She plays Natasha / Black Widow in the Marvel Cinematic Universe.

Scarlett was born in New York City, the daughter of Karsten Olaf Johansson, an architect, and Melanie Sloan, a producer. Scarlett’s father is Danish, from Copenhagen, and is of Danish and Swedish descent. Scarlett’s mother, who is American-born, is Jewish (of Polish Jewish, Belarusian Jewish, and Russian Jewish descent). Scarlett has described herself as Jewish. She celebrates Christmas and Hanukkah. She also holds both American and Danish citizenship. Her sister is actress Vanessa Johansson. A childhood picture of Scarlett, her parents, and three of her siblings can be seen here.

Scarlett is married to comedian, actor, and writer Colin Jost. She has a daughter with her former husband Romain Dauriac; and a son with Colin.

A DNA test whose results were displayed on the show Finding Your Roots with Henry Louis Gates, Jr. (2020) stated that Scarlett’s genetic ancestry is:

Genetically, she was found to have a common ancestor with actress Isabella Rossellini, likely through shared Swedish ancestry, and show host and producer Andy Cohen, through shared Ashkenazi ancestry.

Scarlett’s paternal grandfather was Ejner Johansson (Ejner Bainkamp Johansson, the son of Axel Robert Johansson and Margrethe/Margaret Hansine Hansen). Ejner was born in Copenhagen, and was a screenwriter, art critic, film director, and cultural personality. Axel was born in Furuby, Kronoberg County, Sweden, the son of Johan Magnus Magnusson, who was from Tjureda, Kronobergs län, Småland, and of Carolina/Karalina/Karolina Charlotta Johansdotter, who was from Furuby. Scarlett’s great-grandmother Margrethe was Danish, from Skibby, Horns, Frederiksborg, the daughter of Jens Hansen, who was from Nakkedam, Ferslev, and of Louise Georgine Amalie Beinkamp, who was from Amtmandens Hus, Sorø, Sjælland.

Scarlett’s maternal grandfather was Meyer “Michael” Schlamberg (the son of Schlachne/Shloime/Sol Szlamberg/Schlamberg and Mollie Sussman). The surname Szlamberg/Schlamberg was changed to Sloan. Scarlett’s grandfather Meyer was born in New York, to Polish Jewish parents, with family from Warsaw, and Grójec, Grójec County, Masovian Voivodeship. Schlachne was born in Grójec, the son of Leib Schlamberg and Zlata Schuemonitz. Schlachne’s brother, Scarlett’s great-great-uncle Mosze Szlamberg, was killed in the Holocaust in the Warsaw Ghetto, in Poland, along with at least two of his children, Zlata and Mandil.

Scarlett’s great-uncle, Phil Schlamberg, was the last known combat death of World War II. He was the wingman of WWII fighter pilot, Captain Jerry Yellin (who was also Jewish).

Genealogy of Scarlett Johansson (focusing on her father’s side) – http://family.nose.dk