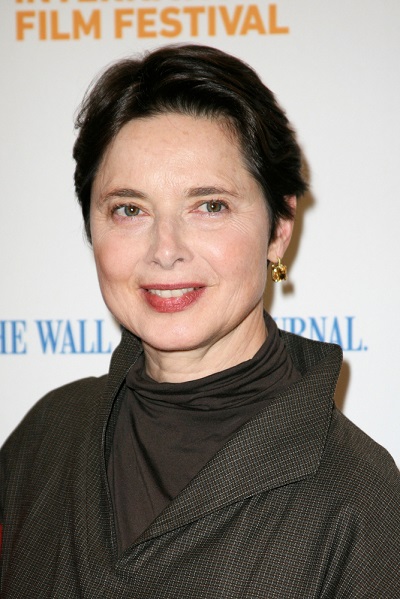 Rossellini in 2010, photo by Prphotos.com

Isabella Rossellini is an Italian actress, filmmaker, author, philanthropist, and model. Her roles include White Nights, Blue Velvet, Cousins, Wild at Heart, Death Becomes Her, Fearless, Immortal Beloved, Big Night, Crime of the Century, Roger Dodger, The Saddest Music in the World, and Two Lovers, among many other films.

Isabella is the daughter of Swedish actress Ingrid Bergman, who was of half Swedish and half German descent, and of Italian director Roberto Rossellini, who was of mostly Italian, and some French, ancestry. Isabella holds dual Italian and U.S. citizenship. Her paternal half-brother is film producer and left-wing political activist Renzo Rossellini, and her maternal half-sister is television journalist Pia Lindström.

Isabella was raised in Rome and Santa Marinella, Italy, and Paris, France, among other locations. She has two children, a daughter, food editor and writer Elettra Rossellini Wiedemann, with her former husband, model and Microsoft design manager Jon Wiedemann; and a son, who Isabella adopted.

Isabella’s paternal grandfather was Angiolo Giuseppe “Beppino” Rossellini (the son of Zeffiro/Luigi Rossellini and Giuseppina Benedetti). Zeffiro was from Pisa, Tuscany, Italy, and the surname was spelled as Rosellini. Giuseppe was from Rovigo, Veneto, Italy and evidently had some French ancestry, from emigrants who had arrived in Italy during the Napoleonic Wars.

Isabella’s maternal grandfather was Justus Samuel Bergman (the son of Johan Peter/Petter Bergman and Brita/Britta Sophia/Sofia Samuelsdotter). Justus was Swedish, and was born in Bäckarslöv, Hössjö Bryggaregård, Slätthög, Kronobergs län. Johan was the son of Jonas Månsson and Marta Jönsdotter/Jönasdotter. Brita was the daughter of Samuel Lorentz Bengtsson and Maria Andersdotter.

A DNA test whose results were displayed on the show Finding Your Roots with Henry Louis Gates, Jr. (2019) stated that Isabella’s genetic ancestry is:

Genetically, she was found to have a common ancestor with American actress Scarlett Johansson, likely through shared Swedish ancestry.

Genealogy of Isabella Rossellini (focusing on her mother’s side) – http://www.wikitree.com