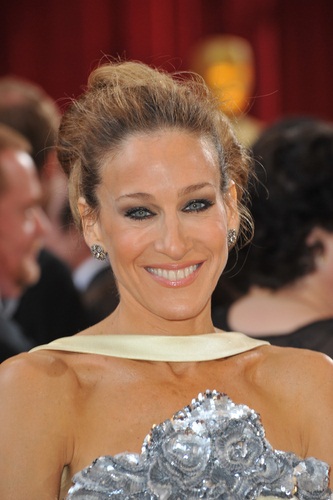 Sarah Jessica Parker is an American actress, producer, and designer. She is the star of the Sex and the City series and films.

Her father, Stephen J. Parker, was Jewish (his family emigrated from Russia). Her mother, Barbara (Keck), is from a Christian background, and is of German, and smaller amounts of French and English, descent. While she is secular, Sarah has said that she always considered herself Jewish. Sarah is married to actor Matthew Broderick, with whom she has three children.

Sarah’s maternal grandmother was Lillian Katherine “Dolly” Breitenbuecher/Brietenbuecher/Britten/Britton (the daughter of Louis Frederick Breitenbuecher/Britten/Britton and Lillian Hodge). Sarah’s grandmother Lillian was born in Ohio. Louis’s parents, Charles/Carl/Karl Breitenbuecher and Barbara Maas/Mass, were German immigrants. Lillian’s father, Elva Dore Hodge, was the son of John Eber Hodge and Mary E. Stewart, and had English ancestry; at least several branches of his family had been in the United States since the 1600s. Lillian’s mother, Katheryn/Katherine “Katie” Schwartzstraub/Weis, was a German immigrant, the daughter of William Schwartzstraub and Minnie Stork.

Information about Sarah’s appearance on Who Do You Think You Are?, NBC, March 5, 2010, No. 1, season 1 – http://www.whodoyouthinkyouaremagazine.com
http://www.ancestry.co.uk
http://learn.nbc.ancestry.com