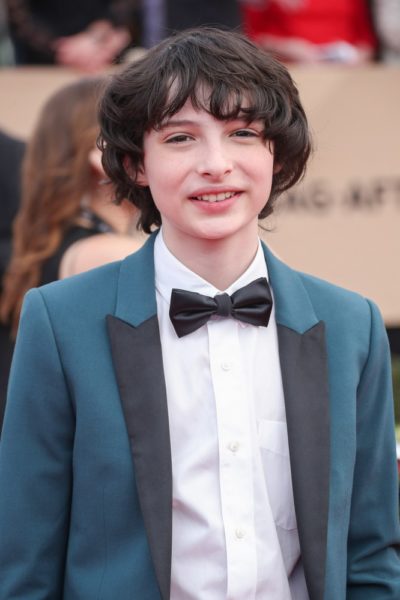 Finn Wolfhard is a Canadian actor and musician. He is known for starring in the show Stranger Things, and the films It (2017), It Chapter Two (2019), and Ghostbusters: Afterlife. His brother is actor Nick Wolfhard.

[Finn’s] my given, full name. Finn’s not short for anything; it’s just Finn Wolfhard. And then Wolfhard means, I think, heart of the wolf in German. What’s funny is I’m German, but then I’m like French – I’m French and German and then Jewish. It’s really weird. I have really weird blood. And then I go to Catholic school, which is really weird.

Finn likely is descended from John Wolfgang Wolfhard, who was born, in 1903, in Bichofingen, Germany. John was the son of Karl Adolf Wolfhard and Mathilde Guth. Mathilde was a pastor’s daughter.

Finn’s adoptive maternal grandfather was Lawrence Charles LaTouche Jolivet (the son of Alfred Eugene Jolivet and Beatrice Wilhelmina Theodora LaTouche, later known as Trixie Witherbee). Finn’s grandfather Lawrence was born in Dieppe, France, and was raised at least partially in Stowe, England. Lawrence was president of the British Columbia Liberal Association. Finn’s great-grandfather Alfred was born in Richmond, Surrey, England, the son of parents from Paris, France, Charles Eugene Jolivet, who owned vineyards in France, and Pauline Hélène Vaillant/Vaillent/Valunt, a concert musician, whose own mother was of Welsh descent. Alfred’s sister was actress Rita Jolivet. Finn’s great-grandmother Beatrice was born in London, England, the daughter of James LaTouche/La Touche and Mary May Cummings/Cummins/Crimmins.

Finn’s adoptive maternal grandmother was Patricia Mary “Trish” Lynch (the daughter of Arthur Louis Lynch and Janet Hunter Elizabeth Doughty). Patricia was born in Saskatoon, Saskatchewan. Arthur was born in Carleton, Ontario, Canada, of Irish descent, and was the son of William Joseph/John Lynch and Ann Josephine “Annie” Mullin. Janet was born in Wanstead, Essex, England, and was the daughter of George Bell/Sell Doughty and Janet Hunter Kerr, who was of Scottish descent.

Genealogy of Finn Wolfhard (focusing on his mother’s side) – https://www.geni.com