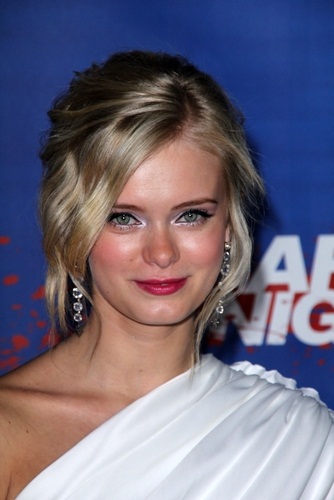 Sara Paxton is an American actress, singer, and model. She is known for her roles in the films Aquamarine, Superhero Movie, The Last House on the Left, The Innkeepers, and The Front Runner, and the show Summerland, among many other works. She is married to actor, writer, and director Zach Cregger.

Sara’s father, Steven Ray Paxton, who was born in California, is of Irish, Scottish, English, and very distant French, descent. Steven is a convert to Judaism.

Sara stated in an interview that she is able to speak some Spanish, but not fluently. She also mentioned that her mother stopped speaking to her in English to make her learn Spanish.

Sara’s paternal grandfather is Raymond Emery Paxton (the son of Russell McQuiston Paxton and Vita Marie Gerard). Raymond was born in Colorado. Russell was the son of James Emry Paxton and Eva Carolyn McQuiston. Vita was the daughter of Charles Raymond/Ray Gerard and Carrie May Warner.

Sara’s paternal grandmother is Barbara Lou Layne (the daughter of Lewis Libourn Layne and Beulah Bunch). Barbara was born in California. Lewis was born in Texas, the son of William Howard Layne and Maude/Maud Lewis. Beulah was the daughter of Earnest C. Bunch and Florence M. Inman.

Genealogy of Sara Paxton (focusing on her father’s side) – http://famouskin.com