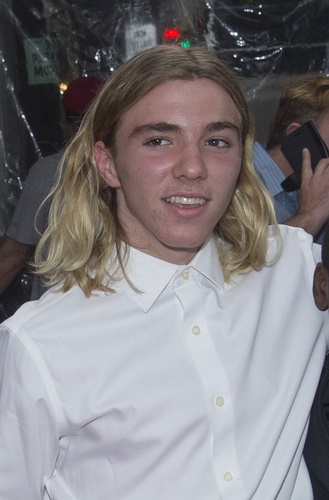 Ritchie in 2015, photo by Prphotos.com

Rocco Ritchie is the son of English filmmaker Guy Ritchie and American musician and actress Madonna. He is the younger half-brother of Madonna’s daughter, Lourdes Leon.

Rocco’s paternal grandfather is Captain John Vivian Ritchie (the son of Major Stewart/Stuart John Ritchie and Doris Margaretta McLaughlin). Major Stewart was the son of John Robert Ritchie and Eva Marion Louisa Powell. Doris is the daughter of Vivian Guy Ouseley McLaughlin and Edith Jane Martineau; Edith was born in Brazil, to English parents, William Martineau and Margaretta Sarah Mason. Her surname comes from her own French great-great-great-grandfather, David Martineau. Through Edith, Rocco shares common ancestors with Catherine, Duchess of Cambridge. The McLaughlins have a pedigree going back to King Edward I of England.

Rocco’s maternal grandfather is Silvio Anthony Ciccone (the son of Gaetano I./S. Ciccone and Michelina Dijulio/Di Julio). Silvio was born in Pennsylvania. Gaetano was from Pacentro, Province of L’Aquila, Abruzzo, Italy, and was the son of Nicola Pietro Ciccone and Anna Maria Mancini. Michelina was also from Pacentro, and was the daughter of Raffaele Dijulio and Concetta or Giovanna Battista Laccone.

Genealogy of Rocco’s mother (focusing on her mother’s side) – https://www.nosorigines.qc.ca

One of Rocco’s French ancestors – http://www.perche-quebec.com