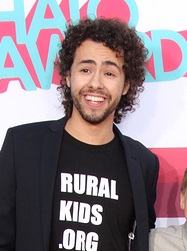 Youssef in 2013, photo by kathclick/Bigstock.com

Ramy Youssef is an American stand-up comedian, writer, and actor. His parents are Egyptian. His name is pronounced ˈɾɑːmi ˈjuːsɪf. His family is Muslim.