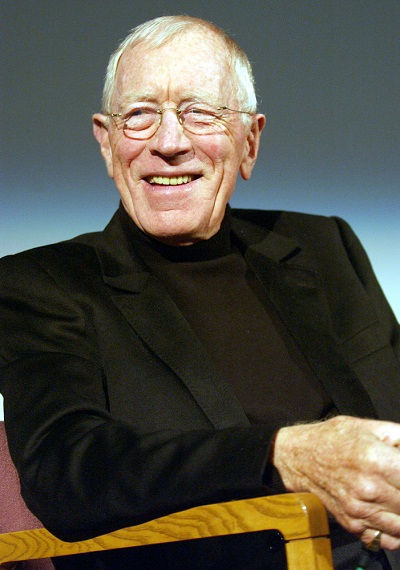 Max von Sydow was a Swedish actor. He was the son of Baroness Maria Margareta (Rappe), a schoolteacher, and Karl/Carl Vilhelm/Wilhelm von Sydow, an ethnologist and professor of Irish, Scandinavian, and comparative folklore. His father was born in Tranhult, Ryssby and his mother in Drättinge, Dädesjö, Kronobergs län. Aside from his Swedish background, he had some German ancestry, from both of his parents, as well as distant Finland-Swedish, and remote Estonian, Latvian, Russian, Danish, Norwegian, English, and Scottish, roots, dating back to the 1600s.

Max took on his first name, Max, from a performer at a flea circus.

He was the only Swedish-born male to be nominated for an Academy Award for acting.

Max’s patrilineal ancestry traces to Christian Fredrik von Sydow, who was born, c. 1714, in Rhineland-Palatinate, Germany. That line’s origin is in Pomerania, formerly part of Prussia, much of which was under Swedish rule from 1630 to 1815.

Max’s matrilineal line can be traced to his five times great-grandmother, Anna Margareta/Margaretha Holm, who was born c. 1721.