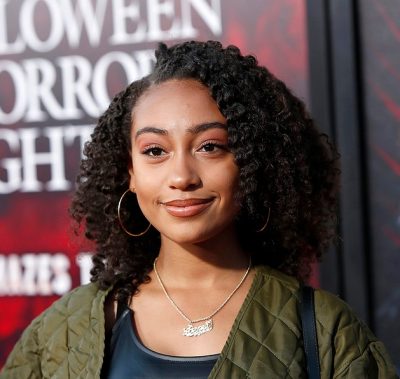 Underwood in 2019, photo by kathclick/Bigstock.com

Lexi Underwood is an American actress and singer. She is known for her roles in Little Fires Everywhere and Sneakerella.

Lexi’s paternal grandfather is Joseph J. Underwood, Jr. (the son of Joseph James Underwood, Sr. and Mary Eleanor Robertson). Lexi’s grandfather Joseph was born in Massachusetts. Lexi’s great-grandfather Joseph was the son of John W. Underwood and Lavinia Coggin Small, who were African-American. Mary was the daughter of Irving Edgar Robertson/Smith and Helen/Ellen Gertrude Johnson. Helen was the daughter of an African-American father and an Irish mother. Irving’s father may have been white, while his mother was mostly descended from Free People of Color, in Massachusetts, with a lineage that can be traced back to Tobey/Toby Talbot (1735-1815) and Sampson Dunbar (1721-1804). Irving’s maternal great-grandmother was the daughter of a Tobagonian father and a Dutch mother.

Lexi’s maternal grandfather likely is James William Black (the son of Ed Black and Nellie Mae Barnett). James was born in North Carolina, and is a professional golfer. Ed was the son of William Black and Hannah. Nellie was the daughter of Robert “Bob” Barnett and Nancy.