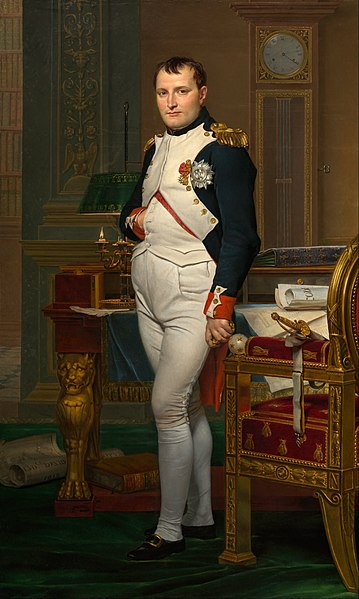 The Emperor Napoleon in His Study at the Tuileries by Jacques-Louis David, portrait in 1812, Public domain, via Wikimedia Commons

Napoleon was a French military and political leader. He was of entirely Italian descent [Corsican].

Napoleon was the son of Maria Letizia (Ramolino) and Carlo Maria Buonaparte, who was a lawyer and politician. He was married to Austrian archduchess Marie Louise, Duchess of Parma, until his death, with whom he had a son. His brother was lawyer and diplomat Joseph Bonaparte, who was King of Naples and Sicily, from 30 March, 1806 to 6 June, 1808, as Giuseppe I; and King of Spain and the Indies, from 6 June, 1808 to 11 December, 1813, as José I.