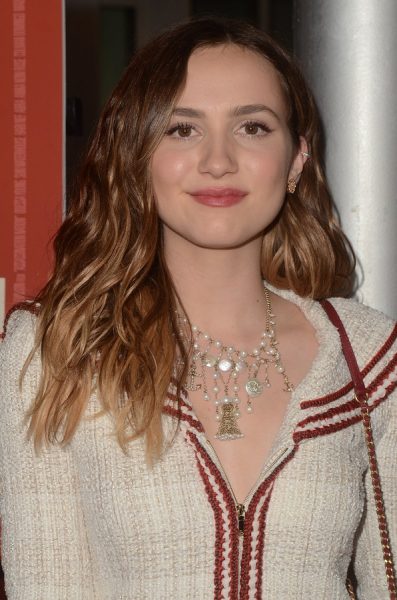 Apatow in 2018, photo by kathclick/Bigstock.com

Maude Apatow is an American actress.

She is the daughter of actress and comedian Leslie Mann and director, writer, producer, and comedian Judd Apatow. Her sister is actress Iris Apatow.

Her father is Ashkenazi Jewish. Her mother is of three eighths Irish, one eighth German, one quarter Scottish, and one quarter Finnish, descent.

Maude’s paternal grandfather is Maury Apatow (the son of Leo Apatow and Belle Spivak). Maury was a real estate developer. Leo was born in New York, the son of Morris Apatow and Mary, who were from Kiev, Ukraine. Belle was born in Russia, the daughter of Jacob Spivak and Sadie Reichman.

Maude’s paternal grandmother is named Tamara Shad (the daughter of Robert Abraham/Aba “Bob” Shad and Molly). Robert was a record producer and label owner, who founded Time Records, Brent Records, and Mainstream Records. He was born Abraham Shadrinsky in New York, and was the son of Jewish emigrants from Vitebsk Province, Belarus, Russian Empire, Charles Shadrinsky and Tillie Monisoff/Monosow. Maude’s great-grandmother Molly appeared in her father’s film This Is 40 (2012), playing the grandmother of Paul Rudd’s character.

Maude’s maternal grandfather was Richard Hand (the son of Thomas Edward Hand and Kathryn Jane Schneider). Mann is the surname of Maude’s mother’s stepfather. Thomas was the son of Irish parents, John Hand, who was from Caven, and Lillian, who was from Limerick. Kathryn was born in New York, the daughter of Laurence/Lawrence R. Schneider, who was of German descent, and of May/Mae Ellen Gilmartin, who was of Irish ancestry.