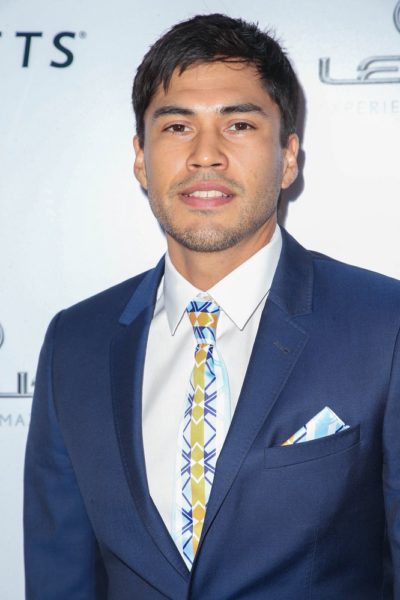 Martin Sensmeier is an American actor and model. He was one of the leads in the film The Magnificent Seven (2016).

Martin was born in Anchorage, Alaska, the son of Eva and Raymond Sensmeier. In an interview, it was mentioned (at 33:37) that Martin is of Tlingit, Koyukon-Athabascan, and Irish descent. He also has Eyak Native Alaskan and German ancestry. He was raised in Yakutat, a remote, Tlingit coastal community in southeast Alaska. Growing up, Martin learned about the tradition of his tribe, and he is proud of being Native.

Martin is an ambassador for The Native Wellness Institute.

Some sources state that Martin also has French ancestry. It is not clear if this is accurate.

Martin’s paternal grandfather was Gilbert Michael Sensmeier (the son of Louis Daniel/David Sensmeier and Cecelia/Elia Ann Kissel). Gilbert was born in Indiana, and was of German descent. Louis was the son of Louis August Sensmeier, whose father was German, and of Elizabeth Kister/Kuester. Cecelia was the daughter of Michael H. Kissel and Maria Anna Regina Zirkelbach.

Martin’s paternal grandmother was Violet Elizabeth James (the daughter of Sheldon James and Annie Katella Dixon). Violet was born in Yakutat, Alaska. Sheldon was Tlingit Native Alaskan, and was the son of Ned James and Jennie Abraham. Annie was the daughter of John Katella and Sophie Isaacs or Catherine/Katie/Kitty, who was Eyak Native Alaskan.

Sources: Genealogy of Martin Sensmeier (focusing on his father’s side) – https://wc.rootsweb.com