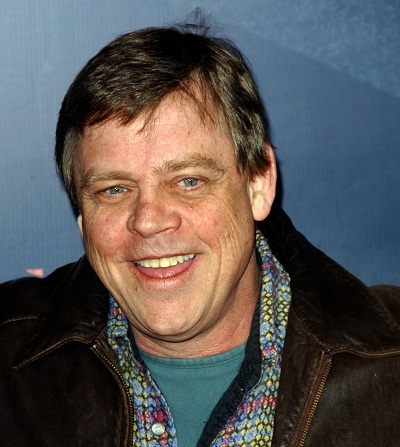 Mark Hamill is an American actor, writer, director, and producer. He plays Luke Skywalker in the Star Wars films and voices Joker in the animated Batman franchise.

Mark is the son of Virginia Suzanne (Johnson) and William Thomas Hamill. He is married to dental hygienist Marilou York, with whom he has three children.

Mark’s paternal grandfather was William Thomas Hamill (the son of Hockley Thomas/G. Hamill and Katherine Bernadette Haggert). William was born in Colorado. Hockley was the son of William Arthur Hamill and Priscilla Leedom McKee. Katherine was the daughter of James H. Haggert and Catherine G. McNulty.

Mark’s maternal grandfather was Luther Nathaniel Johnson (the son of Swan Johnson and Hannah/Hanna Josephine Peterson). Luther was born in Minnesota. Swan was born in Sweden, the son of John Månsson and Pernilla Sonesdotter. Hannah was born in Iowa, to Swedish parents, John P. Peterson and Hanna Bengtsdotter.

Sources: Genealogies of Mark Hamill (focusing on his father’s side) – http://worldconnect.rootsweb.ancestry.com
https://www.geni.com