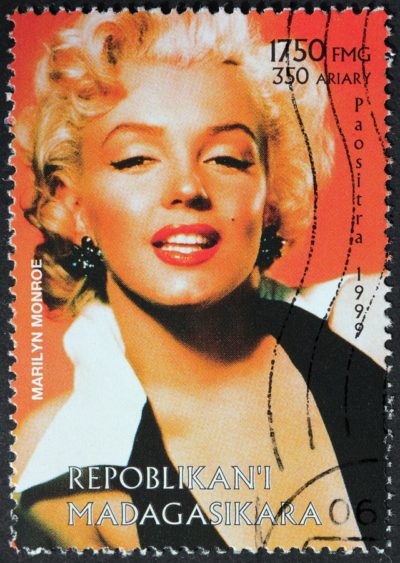 Marilyn Monroe was an American actress, model, and singer. Her roles include As Young as You Feel, Monkey Business, The Seven Year Itch, Some Like It Hot, and The Misfits. She was on the cover of the first issue of Playboy.

Her half-sister was author Berniece Baker Miracle. Marilyn’s mother, Gladys Pearl (Monroe), was born in Porfirio Díaz, Mexico, now Piedras Negras, to American parents. Her family had moved there from the Midwest during the droughts of the 1890s. She had English, as well as Scottish, Irish, and Welsh, ancestry. A DNA test of a relative of Marilyn’s maternal grandfather established Marilyn as a descendant of a soldier from the area around Tain, Scotland, who was exiled to America after the English Civil War, in the mid-17th century. Marilyn’s stepfather was John Newton Baker.

During her youth, Marilyn lived with future film star Jody Lawrance. Her mother Gladys was a friend and co-worker of Jody’s stepmother, film editor Clara Grace McKee-Evans (née Atchinson). Grace became a legal guardian of Marilyn. Marilyn was enumerated in the 1940 U.S. Census in the household of Ervin and Grace Goddard.

Marilyn’s maternal grandfather was Otis Elmer Monroe (the son of Jacob Monroe and Mary E. Appleton). Otis was born in Indiana. Mary was the daughter of James Appleton and Elizabeth Jane Smith.