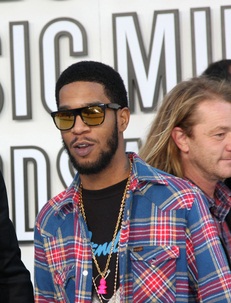 Kid Cudi, also credited as Scott Mescudi and KiD CuDi, is an American rapper, singer, songwriter, multi-instrumentalist, record producer, and actor. He is known for his tracks Day N Nite and Make Her Say, from his debut album, Man on the Moon: The End of Day. Cudi has a unique style, which could be described as alternative hip-hop, with some rock influence. He is associated with artists like Kanye West and Common. He is part of the hip hop duo The Scotts, with Travis Scott.

His father, Lindberg Styles Mescudi, had Mexican and African-American ancestry. His mother, Elsie Harriet (Banks), is African-American, originally from Tennessee. Both of Kid’s paternal grandparents were listed as being black on United States Censuses.

Kid has a daughter.

Kid’s paternal grandfather was Charles Manitow Mescudi (the son of Joseph Mescudi and of Vaira Escudara/Escudero). Charles was born in Albuquerque, Bernalillo, New Mexico. It is likely that Charles was of mixed Mexican-African ancestry.

Kid’s paternal grandmother was Essie Viola Lawson (the daughter of Ephraim/Epriam/Ephream/Ephriam Lawson and Flora/Floretta Swaney/Sweeney/Sweeny). Essie was black, and was born in Franklin, Venango, Pennsylvania, to a Canadian-born father and a Pennsylvania-born mother.

Genealogy of Kid Cudi (focusing on his father’s side) – https://www.geni.com