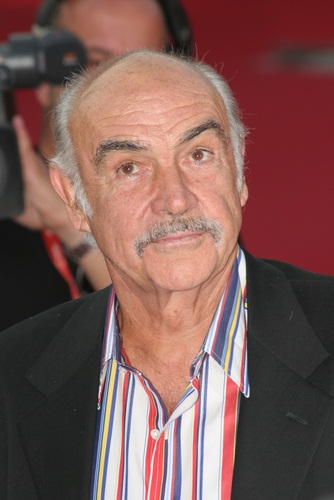 Sean Connery was a Scottish actor and producer. He is known for popularizing James Bond on the movie screen, playing the character in seven films. He won the Academy Award for Best Supporting Actor for The Untouchables (1987), and also starred in The Anderson Tapes, Murder on the Orient Express, The Man Who Would Be King, and Highlander, among many other films.

Sean was the son of Euphemia McBain (McLean) and Joseph Connery. His brother, Neil Connery, was also an actor. Sean was married to painter Micheline Roquebrune, until his death. He had a son, actor and director Jason Connery, with his former wife, Australian actress Diane Cilento.

Sean was selected People Magazine’s “Sexiest Man Alive” in 1989. He has been, thus far, the only Scottish-born man to be given this title by the magazine.

Sean’s paternal grandfather was Thomas Connery (the son of James Connery and Elizabeth McPhillips). Thomas’s parents were Irish, usually said to have roots in Wexford. News reports have referred to Thomas as an Irish Traveller.

Sean’s maternal grandmother was Helen Forbes Ross (the daughter of John Forbes Ross and Mary Reilly). Helen was Scottish, and was born in Aberfeldy, Grandtully, Perth and Kinross; she may have also had some Irish ancestry. John was the son of James Ross and Christina Tullock.

Sean’s mother had roots in Fife, and Uig on Skye.