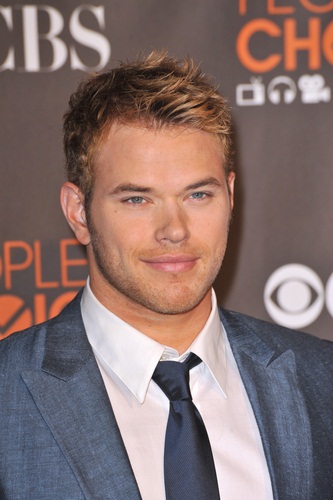 Kellan Lutz is an American model and actor. His roles include the films Stick It, Twilight, A Nightmare on Elm Street, Immortals, The Expendables 3, and The Legend of Hercules, and the show FBI: Most Wanted.

Kellan’s father is of three quarters German and approximately one quarter English, descent. Kellan’s mother is of half German, one quarter Swedish, and one quarter Dutch, ancestry. He was raised partly in Scottsdale, Arizona.

Kellan is married to Brittany Gonzales, with whom he has two children.

Kellan’s paternal grandfather was Ralph Paul Lutz (the son of Jacob Lutz and Magdalena Stevhan). Ralph was born in North Dakota, to a father born in Russia and a mother born in North Dakota. Both of them were from ethnic German families, of the Lutheran faith, that had lived in Russia and Poland for many generations. Magdalena was the daughter of Johann Stephan, Jr. and Regina Finck.

Kellan’s paternal grandmother was Hazel Marie Johnson (the daughter of Wayne Baird Johnson and Della L. Hundredmark/Heundertmark). Hazel was born in North Dakota. Wayne was born in Iowa, to William Earl Johnson and Mary Catherine Young, and had English ancestry. Della was born in Minnesota, to German parents.

Kellan’s matrilineal line can be traced back to his eight times great-grandmother, Ariaantje van der Pijl, who was born, c. 1709, in Dussen, Werkendam, Brabant, Netherlands.

Genealogy of Kellan’s maternal great-grandfather, Lyle John Nelson (focusing on his own father’s side) – http://www.findagrave.com

Genealogy of Kellan’s mother (focusing on her mother’s side) – http://worldconnect.rootsweb.ancestry.com

Genealogy of Kellan’s maternal great-grandmother, Marie Mildred Van Wyngarden (focusing on her own mother’s side) – http://worldconnect.rootsweb.ancestry.com