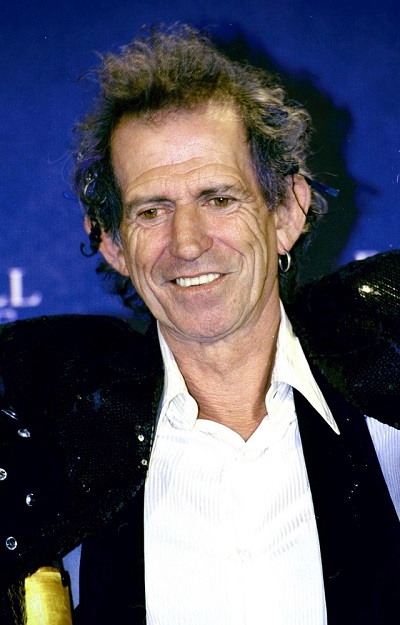 Richards in 2011, photo by Prphotos.com

Keith is the only child of Doris Maud Lydia (Dupree) and Herbert William Richards. He is married to American model and actress Patti Hansen. He has had three children with his former partner, Italian actress, artist, and model Anita Pallenberg; and two children, models Theodora Richards and Alexandra Richards, with Patti.

He is of English, and some Welsh, ancestry. His mother also had remote French Huguenot ancestors who came to England from the Channel Islands in the seventeenth century.

Keith’s paternal grandfather was Ernest George Richards (the son of Barnett James Richards and Louise Vearncomb). Ernest was born in Greater London, England. He was mayor of Walthamstow, a working-class borough in East London. Barnett was the son of Thomas Richards and Sarah. Louise was the daughter of Henry Vearncomb and Jane Milton.

Keith’s paternal grandmother was Eliza Mary Atherton (the daughter of Henry Atherton and Hannah Cooke). Eliza was born in Greater London, England. She was also mayor of Walthamstow, after her husband Ernest’s death. Henry was the son of John Atherton and Mary Owen.