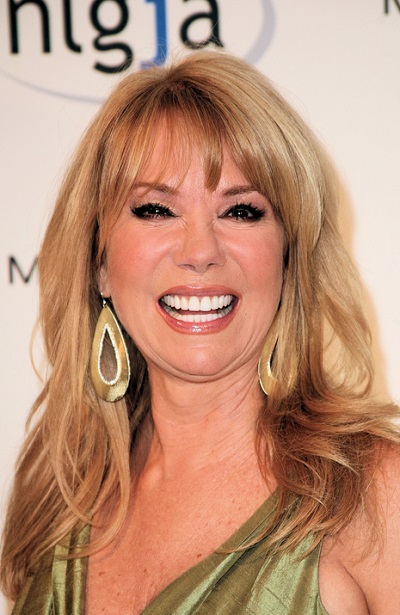 Gifford in 2010, photo by Prphotos.com

Kathie Lee Gifford is an American television personality, comedian, actress, singer, and songwriter. She was born in Paris, France, to American parents, Joan (Cuttell) and Aaron Leon Epstein. She has hosted part of the show Today since 2008, along with Hoda Kotb. She previously co-hosted the show Live! with Regis and Kathie Lee from 1985 to 2000.

Kathie Lee was married to professional football player, actor, and sports commentator Frank Gifford, until his death. The couple have two children, including actress Cassidy Gifford.

Kathie Lee’s paternal grandfather was a Russian Jewish immigrant. Her other ancestry is German, English, and French. Kathie is a devout Christian.

Kathie Lee has also stated that her paternal grandmother was “by all accounts… a full-blooded Native American.” It is not clear if this Native American ancestry has been verified/documented.

Kathie Lee’s maternal grandfather was Alfred Thomas Cuttell (the son of Thomas James Cuttell and Florence/Florance K./Catharine Williams). Alfred was born in Toronto, Ontario, Canada, to a prominent publishing family. Thomas was the son of James Cuttell, who was English, and of Anne Maria Courties/Curtis.

Kathie Lee’s maternal grandmother was Florence/Flora M. Edlich (the daughter of Charles H. Edlich and Mary A. Charlesworth). Florence was born in New York. Charles was the son of German parents, George Emil Edlich and Catharina/Caroline Steinkopf/Stein. Mary was born in New York, the daughter of English parents, Edward Charlesworth and Catharine Lee.