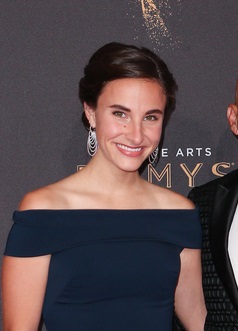 Katherine Cronyn is an American actress.

She is the daughter of Susan and producer and manager Christopher Cronyn. Her father was of five eighths English, one quarter Northern Irish, and one eighth Irish, descent. Her mother was of one half German, one quarter Austrian, and one quarter, French-Canadian descent.

Katherine’s paternal grandfather was actor Hume Cronyn (born Hume Blake Cronyn; the son of Hume Blake Cronyn and Frances Amelia Labatt). Katherine’s grandfather Hume was born in London, Ontario, Canada. Katherine’s great-grandfather Hume, a politician and lawyer, was the son of Verschagle/Verschoyle/Vershoyle Cronyn and Sophia Eliza Blake, who were born in Canada, to Irish Protestant parents. Katherine’s great-grandmother Frances was an heiress of the Labatt Brewing Company. She was the daughter of John Labatt, whose father was from Mountmellick, Laoighis, Republic of Ireland and whose mother was from Twickenham, Middlesex, England; and of Catherine Matilda Biddulph, who also had an Irish-born father and an English mother. Katherine’s great-great-great-grandfathers were Benjamin Cronyn, an Anglican cleric of the Anglo-Irish Protestant Ascendancy, who served as first bishop of the Anglican diocese of Huron and founded Huron College; and John Kinder Labatt, a brewer who was the founder of Labatt.

Katherine’s maternal grandmother was Ursula Loraine Otter (the daughter of Lawrence Aloysius Otter and Cecelia Antionette Normandeau). Lawrence was the son of William Otter, who was German, and of Katherine Haubris, whose parents were German. Cecelia was the daughter of French-Canadian parents, Patrick Onil Normandeau and Angelina Denault.

Sources: Genealogy of Katherine’s father (focusing on his father’s side) – https://wc.rootsweb.com