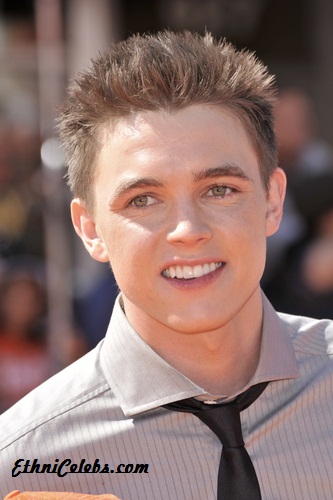 McCartney in 2008, photo by Featureflash / Shutterstock.com

Jesse McCartney is an American singer, songwriter, and actor. He was a member of the band Dream Street, along with Matt Ballinger, Frankie J. Galasso, Gregory Raposo, and Chris Trousdale.

Jesse is married to Katie Peterson.

Jesse’s maternal grandfather is Richard H. Sarber (the son of Harry Sarber and Sylvia Virginia Hall). Richard was born in California. Sylvia was the daughter of Frank Lincoln Hall and Rosa Magdalene Fend, whose father, George Fend, was German, and whose mother, Magdalene Lena Besang, had German ancestry.

Jesse’s maternal grandmother is Joyce Herrick (the daughter of Clifton Ames Herrick and Florence Margaret Oakley). Joyce was born in Minnesota. Clifton was the son of Eugene Denslow Herrick and Edith Emogene Rugg. Jesse’s great-grandmother Florence was the daughter of Samuel N. Oakley, who was born in Ontario, Canada, to an English-born father, and of Margaret Anna Nicoll, whose parents, William Roberts Nicoll, Sr., and Margaret Ramsay Martin, were Scottish (her father from Forfar, Angus and her mother from Lochee, Angus).

Genealogy of Jesse’s paternal grandmother, Eleanor Gilday (focusing on her mother’s side) – http://worldconnect.rootsweb.ancestry.com

Genealogy of Jesse McCartney (focusing on his mother’s side) – http://worldconnect.rootsweb.ancestry.com

Genealogy of Jesse’s maternal great-grandmother, Sylvia Virginia Hall (focusing on her own father’s side) – http://worldconnect.rootsweb.ancestry.com