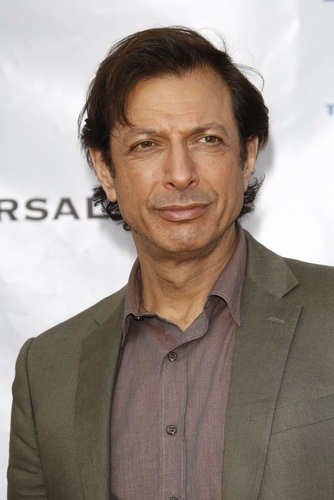 Jeff Goldblum is an American actor. He has starred in the films The Fly, Deep Cover, Jurassic Park, and Independence Day, among many others.

Jeff’s paternal grandfather was named Josef Povartzik/Joseph Goldblum (the son of Zelik/Zelig Povartzik and Pessia). Josef was a Jewish emigrant, from Tinkowitz, Minsk, with family in Starobin, in the Russian Empire. Zelik was the son of Morris Povartzik.

Jeff’s paternal grandmother was Lillian M. “Lillie” Leventon (the daughter of Harry Leventon and Sarah Lewis Hytovitz). Lillian was born in Pennsylvania, to Russian Jewish parents. Sarah was the daughter of Isaac Lewis.

Jeff’s maternal grandfather was Samuel Louis/Leo “Sam” Temeles (the son of Abraham Temeles and Beille/Bella/Belle/Beila Shapiro). Samuel was a Jewish emigrant, from Zloczow/Zolochiv, then in the Austro-Hungarian Empire, now in Ukraine. Abraham was the son of Joel Temeles. Beila was the daughter of Szaja Shapiro and Ryfki.

Jeff’s maternal grandmother was Anna/Ann G. Katz (the daughter of Aaron Zelig Katz and Cecelia Katz). Anna was born in Pennsylvania, to Austrian Jewish parents. Aaron was the son of Jacob Katz. Cecelia was the daughter of Reuven Katz.