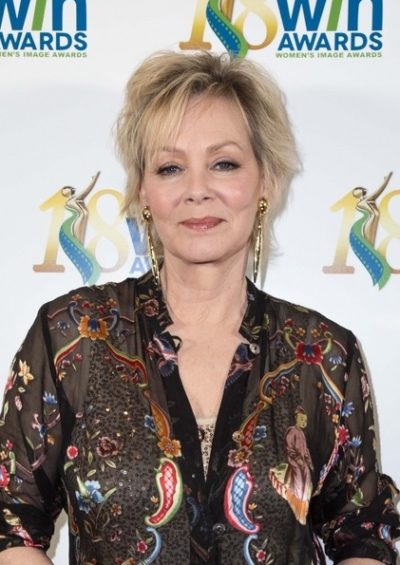 Jean Smart is an American actress. She is known for her roles on the shows Frasier, Watchmen, and Hacks, among other work on television and stage, and in film.

She is the daughter of Kathleen Marie “Kay” (Sanders) and Douglas Alexander Smart, a teacher. Her father was born in Seattle, to Scottish parents, from Forfarshire. Her mother was born in Portland, Oregon, to a Canadian family, of English, Irish/Northern Irish, and a small amount of Welsh, descent.

Jean was married to actor Richard Gilliland, until his death, with whom she has two children.

Jean’s maternal grandfather was Joseph Hume Sanders (the son of John Philip Sanders and Elizabeth Ann Hume). Joseph was born on Prince Edward Island, Canada. John was the son of Philip Sanders, who was English, from Devon, and of Sarah Agnes Compton. Elizabeth was the daughter of David Henry Hume and Emily Compton.

Jean’s maternal grandmother was Josephine Phoebe Armour (the daughter of Thomas Armour and Katie Marie Duhig). Josephine was born in Washington, to Canadian parents. Thomas was born in Ontario, the son of Irish parents, Robert Armour, from Antrim, and Phoebe Ann Stinson, from Monaghan. Katie was born in British Columbia, the daughter of American parents, from Massachusetts, Dennis Dexter Duhig, whose father was Irish, and Marietta Josephine Spear.