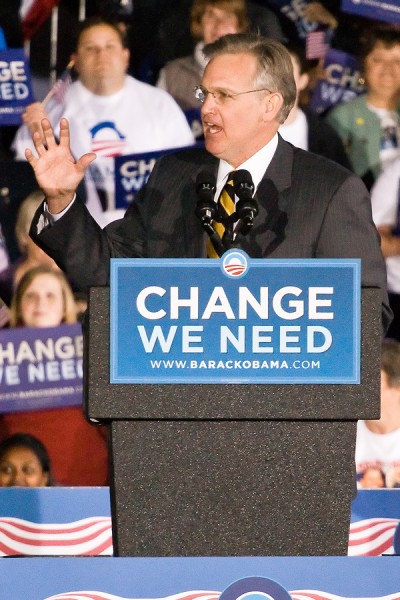 Nixon in 2008, photo by KCBearcat/Bigstock.com

Jay is the son of Betty Lea and Jeremiah Nixon, who was Mayor of De Soto.

Jay is largely of English ancestry. One of his paternal great-grandmothers was Jewish (of Sephardi and Ashkenazi descent), and descended from one of the early prominent Jewish families in the U.S. Jay also has a small amount of German roots. He is married to Georganne Wheeler, with whom he has two children.

Jay’s maternal grandfather was Charles Elmer Willson (the son of John Asbury Willson and Amanda Emmeline Reed). Charles was born in Missouri. John was the son of The Rev. Benjamin Franklin Willson and Sarah Jane Jernagin/Jarnagin. Amanda was the daughter of William Reed and of a woman surnamed Wilkerson, or of Margaret McFarland.

Jay’s paternal great-grandmother Louise Jonas was Jewish, the daughter of Charles Henry Jonas and Sarah de Pass Block. Louise’s uncle, Jay’s great-great-great-uncle, Benjamin F. Jonas, was a U.S. Senator from Louisiana (from 1879 to 1885), and was the first Jew in the U.S. Senate. Louise’s grandfather, Abraham Jonas, born in Exeter, England, was the first permanent Jewish resident in Quincy, Illinois, and was a friend of President Abraham Lincoln. Louise’s great-great-great-uncle, Gershom Mendes Seixas, was the first native-born Jewish minister (rabbi) in the U.S., and was leader of Congregation Shearith Israel, the Spanish and Portuguese Synagogue of New York. Jay’s Jewish ancestors lived in Bohemia, England, Poland, Portugal, Germany, Jamaica, Spain, and Morocco.

Genealogy of Jay’s paternal grandfather, Clark Nixon (focusing on his own mother’s side) – http://www.neilpiwovar.com