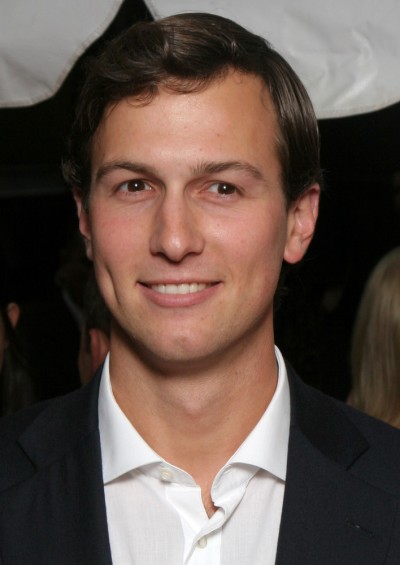 Kushner in 2007, photo by Prphotos

Jared is the son of Seryl (Stadtmauer) and Charles Kushner (born Chanan Kushner), a real estate developer. He is the brother of Joshua Kushner, who is also a businessperson and investor.

Jared was raised in a Jewish family.

Jared is married to businessperson and model Ivanka Trump, with whom he has three children. Ivanka is the daughter of Ivana Trump (born Ivana Marie Zelníčková), a model, and Donald Trump, a businessperson, television personality, and the 45th President of the United States. Ivanka converted to Orthodox Judaism.

Jared’s paternal grandfather was Joseph “Yossel” Kushner (born Berkowitz, the son of Moshe Berkowitz and Chana Slonimski). Joseph was born in Kostrzyn nad Odrą, Poland, and survived the Holocaust. He took his wife’s surname of Kushner. Chana was murdered by the Nazis in 1942.

Jared’s paternal grandmother was Reichel “Rae” Kushner (the daughter of Naum Kushner and Hinda Leah Bloch). Reichel was born in Navahrudak, Hrodna Province, Belarus, and survived the Holocaust. Hinda was the daughter of Moishe Bloch and Esther. Hinda was killed by the Nazis in 1943.

Jared’s maternal grandmother is Marilyn Felsen (the daughter of Julius Felsen and Anat/Annette Meister). Marilyn was born in New York, of Polish Jewish descent. Julius was born in Buszkowice, near Przemysl, Poland, the son of Mordechai Felsen and Baltsha Ames. Anat was the daughter of Aaron Meister and Debora Eisner, who were from Podkarpackie Voivodeship, Poland.