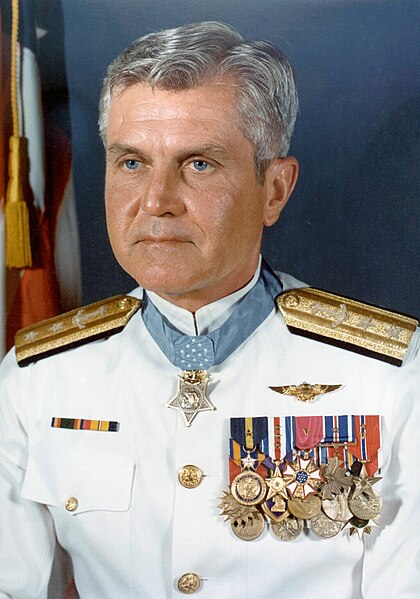 James Stockdale was an American Navy vice admiral, aviator, and politician. He was awarded the Medal of Honor for his service in the Vietnam War, during which he was a prisoner of war for over seven years.

He was an independent candidate for Vice President of the United States in 1992, as the running mate of Presidential candidate Ross Perot.

James was the son of Mabel Edith (Bond) and Vernon Beard Stockdale. He was married to Sybil Stockdale, until his death. The couple had four children. Sybil was a co-founder and National Coordinator of the National League of Families. This was a nonprofit organization working on behalf of American families with members who were Vietnam-era Missing in Action and Prisoners of War.

James’s paternal grandfather was Enoch Baker Stockdale (the son of Robert Stockdale and Lucinda B. Baker). Enoch was born in Pennsylvania. Robert was the son of William Stockdale, whose father was born in Northern Ireland, and of Hannah McQuaide. Lucinda was the daughter of Enoch Baker and Elizabeth Jennings.

James’s paternal grandmother was Catherine Elvira “Katie” Beard (the daughter of William Thomas Beard and Isabel Caroline Dobbins). Catherine was born in Illinois. William was the son of Joseph Wallace Beard and Lurena Neel. Isabel was the daughter of Robert B. Dobbins and Jane Bratney.

James’s maternal grandfather was Jasper Bond (the son of Walter Bond and Eleanor Moon). Jasper was born in Ohio. Walter was the son of Edward L. Bond and Sarah/Sally Robinette. Eleanor was the daughter of John R. Moon and Elizabeth Sarah Mount.

James’s maternal grandmother was Amanda/Minda Ann Callison (the daughter of Isaac Callison and Hulda Shallum Hickman). Amanda was born in Virginia. Isaac was the son of Anthony Callison, whose parents were from Northern Ireland, and of Abigail McClung. Hulda was the daughter of William Hickman and Mary Elliot/Elliott.