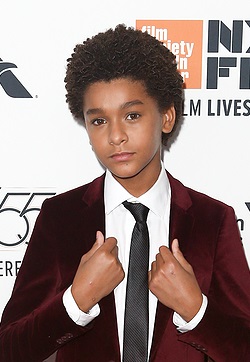 Michael in 2017, photo by Debby Wong/Bigstock.com

Jaden Michael is an American actor and model. He has starred in the films Wonderstruck and Vampires vs. the Bronx , and as Colin Kaepernick in Colin in Black & White. He was raised partly in New Jersey.

He is described as the son of an African-American father and a Dominican Republic mother.