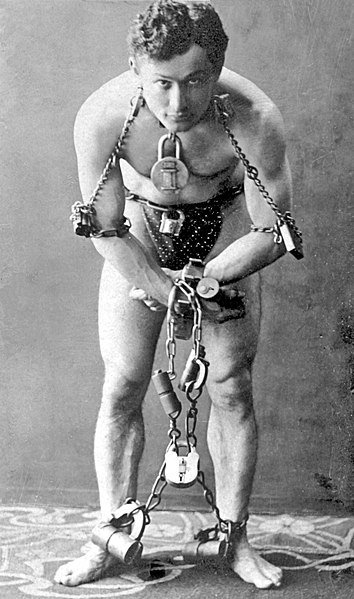 Harry Houdini was an American stage magician, illusionist, and stunt performer. He is known for his sensational escape acts.

He was born in Budapest, then in the Austro-Hungarian Empire (now Hungary), the son of Cecília (Steiner) and Rabbi Mayer Sámuel Weisz/Weiss. His father was born in Nagykanizsai, Zala County, Hungary. The family moved to the U.S. in 1878, settling in Appleton, Wisconsin. They later moved to Milwaukee, and then New York City.

He was a cousin of Helen Schonberger, the wife of actor and comedian Moe Howard, of The Three Stooges. His brother was magician and escape artist Theodore Hardeen.

Harry was married to his stage assistant, Bess Houdini (born Wilhelmina Beatrice Rahner), until his death.

Pictures of, and information about, Harry’s parents – http://www.findagrave.com