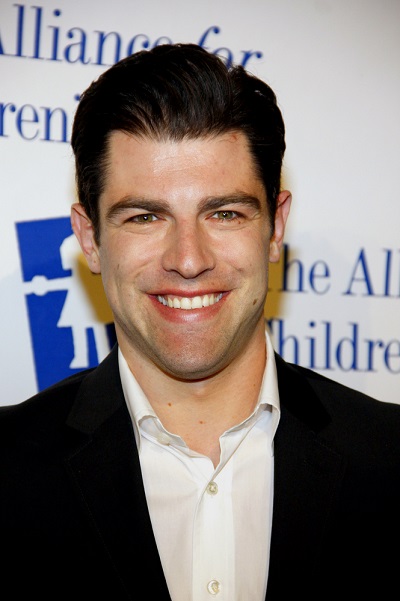 Greenfield in 2012, photo by Prphotos.com

Max Greenfield is an American actor.

His father is from a Jewish family, from Poland and Russia. His mother has Irish and English ancestry, and likely converted to Judaism. Max was raised Jewish, and had a Bar Mitzvah ceremony.

Max is married to casting director Tess Sanchez, with whom he has two children.

Max’s paternal grandfather was Theodore Greenfield (the son of Joseph Grunfeld and Yetta “Yenta” Kanner). Theodore was a Polish Jewish immigrant who moved to the U.S. in 1923. Joseph was the son of Moshe Leib Elias Grunfeld, from Trzeboś, Subcarpathia, and of Toba Leah Kieselstein, from Sokolow Malopolski. Yetta was from Żołynia, Poland, and was the daughter of Moshe Yaakov Kanner and Rochel Leah Wurtzel.

Max’s paternal grandmother was Lillian Zones (the daughter of Samuel Zones and Anna/Hannah Fingold/Feingold). Lillian was a Russian Jewish immigrant who moved to the U.S. in 1928.

Max’s maternal grandmother was Mary Will Holman (the daughter of James William Holman and Lela R./A. Riley). Mary was born in New Mexico. James was the son of Alfred D. Holman and Mary Belle Richardson. Lela was the daughter of William Wight Riley and Sarah Josephine “Sallie” Herndon.

Sources: Genealogy of Max Greenfield (focusing on his father’s side) – http://www.geni.com