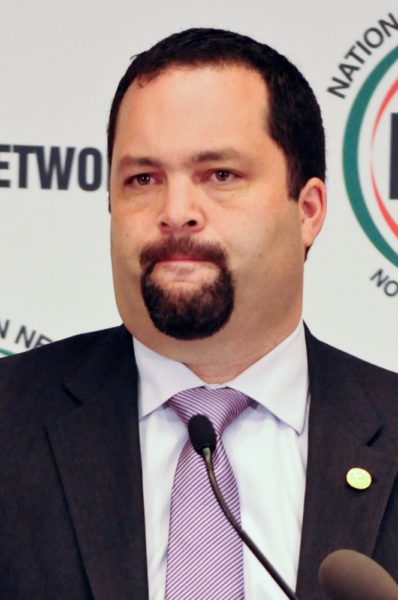 Ben Jealous, also known as Benjamin Jealous, is an American civic leader and politician. He has served as President of People for the American Way, since June 15, 2020, and President and CEO of the National Association for the Advancement of Colored People (NAACP), from September 1, 2008 to November 1, 2013.

Ben is the son of Ann Fredericka (Todd) Jealous, a psychotherapist, author, and activist, and Fred Jealous, who was also a civil rights activist.

Ben’s father, who is from Maine, is white, and from a family with deep roots in New England, going back to the 1600s. Ben’s mother, who is from Virginia, is black. A picture of Ben with his mother and maternal grandmother can be seen here.

He has two children with his former wife, NAACP lawyer Lia Epperson.

A DNA test whose results were displayed on the show Finding Your Roots with Henry Louis Gates, Jr. (2014) stated that Ben’s genetic ancestry is:

In his 2016 book about the show, Finding Your Roots, Season 2: The Official Companion to the PBS Series, Henry Louis Gates, Jr. wrote that Ben’s European ancestry was mostly Northern European, and that his African DNA matches southeastern Bantu (Mozambique, Angola), as well as Benin and Togo, the Ivory Coast, and Ghana, and smaller amounts from Cameroon, Congo, and Senegal.

Ben’s paternal grandfather was Sargent Jealous (the son of Lionel Frederick Jealous and Evelyn Sargent). Ben’s grandfather Sargent was born in Maine. Lionel was the son of Francis Hugh Jealous and Charlotte G. Evelyn was the daughter of Harry Edward Sargent and Anna Laura “Annie” Trask. Through his Sargent line, Ben is a great-great-great-great-nephew of Joseph B. Sargent, who founded manufacturer of locks and hardware, Sargent & Co.

Ben’s paternal grandmother was Annette Smith (the daughter of Joseph Cummings Smith and Ethel Maude/Maud Locke). Annette was born in New Hampshire. Joseph was the son of Leonard Wood Smith and Lucy J. Youngman. Ethel was the daughter of Levi M. Locke and Fannie M. Smith.

Sources: Information about Ben’s appearance on Who Do You Think You Are?, 2014 – https://blogs.ancestry.com