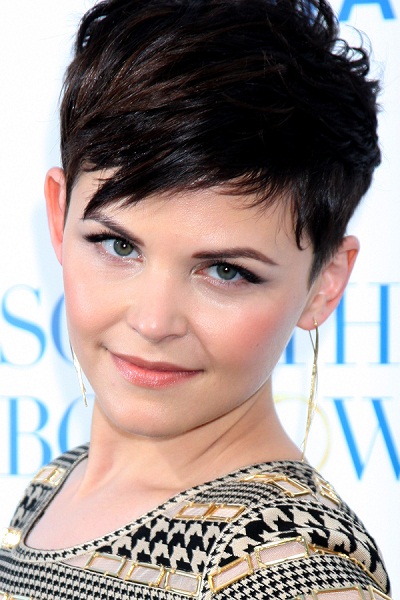 Goodwin in 2011, photo by kathclick/Bigstock.com

Ginnifer Goodwin is an American actress. She changed her name from Jennifer to Ginnifer to distinguish it, and to assist in pronunciation of her name in her regional dialect.

Ginnifer is married to actor Josh Dallas, with whom she has two children.

Ginnifer’s father has English, some Welsh, and distant German, ancestry. Ginnifer’s mother is from a Jewish family, of Lithuanian Jewish, Russian Jewish, and German Jewish descent.

During her childhood, Ginnifer attended synagogue on Saturdays and Unitarian church on Sundays (her parents had both joined a Unitarian church before she was born). Ginnifer was both baptized, and had a Bat Mitzvah ceremony. After leaving Memphis for Hollywood, she lapsed in her Jewish faith. In 2013, she stated that she had recently once again become a practicing Jew. She considers herself Jewish and wants to raise her children in the Jewish faith.

Ginnifer’s maternal grandfather was Phil/Philip A. Kantor (the son of Harry David Kanterovitch/Kantor and Rose Levinson). Phil was born in Mississippi or Tennessee, to Jewish emigrant parents from Vilnius, Lithuania. Harry was the son of Pesach Kanterovitch and Rachel Leah Shapiro. Rose was the daughter of Morris Levinson and Fanny Reva Sheppolevitch.

Ginnifer’s maternal grandmother is Jaqueline Halperin (the daughter of Hal Halperin and May Torgatsch). Hal was born in Odessa, now in the Ukraine, to a Jewish family, the son of Samuel Halperin and Rebeka Rosa/Rose Malcoe. May was born in Chicago, Illinois, to parents of German Jewish descent, Julius Torgatsch, from Ulm, Tübingen, Baden-Württemberg, and Gussie Hart.

Sources: Excerpts from a speech by Ginnifer Goodwin about her Jewish faith, 2013 – http://faithinmemphis.com