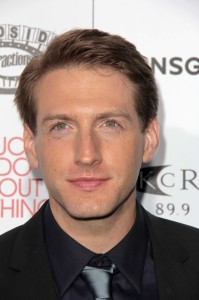 Fran Kranz is an American actor, comedian, and film director. He has starred in the films Much Ado About Nothing and The Cabin in the Woods (2012), and directed/written the film Mass (2021).

His father is of one quarter German and three quarters Irish ancestry. His mother is of English, Northern Irish/Irish, and Scottish descent.

Fran is married to actress Spencer Margaret Richmond, who is the daughter of actress Jaclyn Smith and filmmaker Anthony B. Richmond. The couple has two children.

Fran’s paternal grandmother was Eileen E. Savage (the daughter of Thomas F. Savage and Lydia T. Smith). Eileen was born in Colorado. Thomas was born in New York; according to several records, Thomas was born to an Irish-born father and a New York-born mother, while one record lists both of Thomas’s parents as having been born in Ireland. Lydia was born in Kansas, to Irish parents, John T. Smith and Bridgitte Reagan.

Fran’s maternal grandmother was Patricia P. Caddell (the daughter of John Graham Caddell and Florence Anita Pearl). Fran’s grandmother Patricia was born in California. John was born in Colorado, the son of Edward Caddell and Elizabeth Graham, emigrants from either Northern Ireland, or Ireland and Scotland, respectively. Florence was born in California, to a father from Minnesota, Fred Leavitt/Lewis Pearl, and a mother from Aylwin, Québec, Canada, Fannie West.