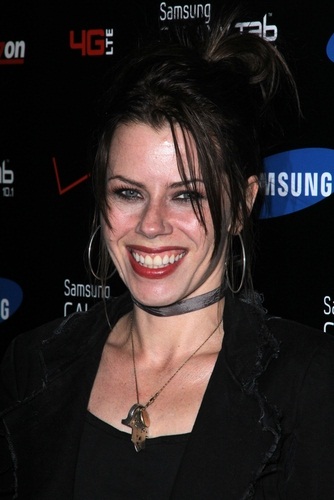 Balk in 2011, image via s_bukley / Shutterstock.com

Fairuza Balk is an American actress and musician. She is known for starring in the films Return to Oz, The Craft, and American History X, among many others.

Fairuza’s father, Solomon Feldthouse (born David Earle Scaff), a folk musician, is originally from Pingree, Idaho, and has English, and smaller amounts of Scots-Irish/Northern Irish, Welsh, and Dutch, ancestry. Fairuza’s mother, Cathryn Balk, a dance teacher, is from California, and is of half German and half English ancestry.

Fairuza has stated that her father has Romani and Cherokee Native American ancestry, and that her mother has Irish and French ancestry. Most, or all, of this statement is not accurate. Fairuza’s father, who was born under the surname Scaff and later changed his surname to Feldthouse, has no documented Romani or Native American ancestry (Fairuza’s nephew has said of his grandfather: “he plays it up that he is a gypsy but is probably just a wannabe”). Fairuza’s mother is not predominantly of Irish or French descent. The surname Feldthouse comes from a man named Harry Walter Feldthouse, an Illinois-born man whose parents were Danish immigrants; it appears that Harry was Fairuza’s father’s stepfather.

Her first name, Fairuza, is a Persian and Arabic name meaning “Turquoise,” “Victory,” or “precious one,” although she is not herself of Persian or Arabic ancestry.

Fairuza’s maternal grandmother was Lavergne Leoni/Leone White (the daughter of Wilson Bradford White and Leoni Irene Rolfe). Lavergne was born in California, and had English ancestry. Wilson was the son of Wilson Salmon White and Ella Virginia Tully. Leoni was the daughter of Amos Rolfe and Delight Blakeslee.

Sources: Fairuza writes about the of the persecution of the Roma – http://www.fairuza.com

Genealogy of Fairuza’s paternal grandmother, Mary Lorraine Cole (focusing on her own father’s side) – http://worldconnect.rootsweb.ancestry.com

profile by Dr. Epic and Ethnic