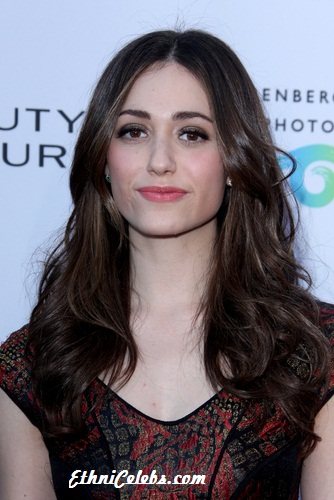 Emmy Rossum is an American actress, singer, and songwriter. She has starred in the films The Day After Tomorrow, Andrew Lloyd Webber’s The Phantom of the Opera, as Christine Daaé, and Poseidon, among others.

Emmy has mentioned having English and Dutch ancestry on her father’s side, and that her father’s family has been in the United States for many generations. Emmy’s mother is Jewish (from a family that emmigrated from Eastern Europe, including Russia, Moldova, and Romania). Emmy identifies as Jewish.

Emmy is married to writer, director, and producer Sam Esmail. Sam is of Egyptian Muslim background. The couple has a daughter.

Emmy’s maternal grandfather was Philip E. Rossum (the son of Emanuel Rossum and Jane/Jennie Goodkin). Philip was born in New York, to Russian Jewish parents. The surname Rossum was also spelled Rossim in some records. Emanuel was the son of S. Rossum and Anna Polon. Jane was the daughter of Hyman Goodkin and Gissel/Getel/Gussie E. Charney.

Emmy’s maternal grandmother was Gertrude “Geraldine” Cohen (the daughter of Moische “Morris” Onitskansky and Bunia “Betty” Tsarivcan). Gertrude was born in New York, to Jewish emigrant parents, from the Romania area. Bunia was born in Telenești, Moldova, the daughter of Itszek Tsarevkan and Charna Bernstein.

Sources: Genealogy of Emmy Rossum (focusing on her mother’s side) – https://www.geni.com