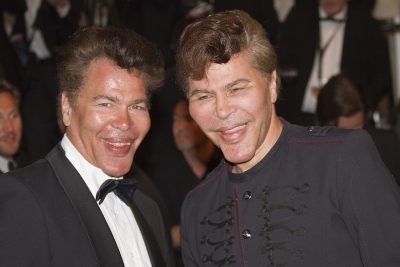 Igor Bogdanoff and Grichka Bogdanoff in 2013, photo by Denis Makarenko/www.bigstockphoto.com/

Place of Death: Paris, France (both)

Igor Bogdanoff and Grichka Bogdanoff were French animators, television producers and presenters, and essayists. They were twins. They presented various subjects in science fiction, popular science, and cosmology, and were involved in a number of controversies over their findings.

Igor and Grichka were born to prince Yuri Mikhailovitch Osten-Sacken-Bogdanoff, a Russian painter, and Marie/Maria Dolorès Franzyska Kolowrat Krakowská/Krakowský. Their father was born in St. Petersburg/Leningrad, Russia. Their mother was the daughter of an African-American father, musician Roland Hayes, and a European countess, born Bertha von Kolowrat-Krakowska/Krakowský, who had met during a concert in Vienna, Austria. As their grandmother was then married to another man, of the Austrian princely House of Colloredo-Mannsfeld, she left her husband, going to give birth to the brothers’ mother in Basel, Switzerland, and then to live in France alone. Their mother was raised by their maternal grandmother in her castle in France, the Château de Saint-Lary near Auch.

Igor was married to Amélie de Bourbon de Parme, until his death. He had a son with comedian Geneviève Grad; three children with his former wife, Countess Ludmilla d’Oultremont; and two children with Amélie.

Igor and Grichka’s paternal grandfather was named Mikhaïl Borisovich Bogdanov/Bogdanoff (the son of Boris Alexandrovich Bogdanov). The Bogdanoff family descends from a Tatar clan which was Russified in the 17th century.

Igor and Grichka’s paternal grandmother was named Anna von Osten-Sacken. The von Osten Sacken is said to be a family of the Baltic German nobility.

Igor and Grichka’s maternal grandfather was musician and lyric tenor Roland Hayes (Roland Wiltse Hayes, the son of William Hayes and Fanny/Fannie Mann). Roland was born in Curryville, Calhoun, Georgia, U.S., to parents who were tenant farmers. Fanny was a former slave. Roland’s great-grandfather Aba Ougi, also known as Charles, a chief in the Ivory Coast, was sent as a slave to the United States in 1790.

Igor and Grichka’s maternal grandmother was countess Bertha von Colloredo-Mansfeld/Mannsfeld (born Bertha Henriette Katharina Nadine Gfin von Kolowrat-Krakowska/Krakowský, the daughter of Count Leopold Philipp/Filip von Kolowrat-Krakowský/Krakowska and Nadine Freiin von Huppmann-Valbella). Countess Bertha was born in Týnec, Klatovy District, Plzeň Region, Czech Republic. Her parents married at St. Patrick’s Cathedral in New York. Igor and Grichka’s great-grandfather Count Leopold was born in Venice, Veneto, Italy, the son of Leopold Krakovský z Kolovrat, who was born in Vienna, Austria, the son of count František/Ferenc Xavér Kolovrat/Kolowrat-Krakovský/Krakowský and countess Julie von Wildenstein Wildbach; and of Natalie Blaszezynska/Błaszczyńska, who was born in Warsaw, Poland. Igor and Grichka’s great-grandmother Nadine was born in Paris, France, and was the daughter of Joseph Frhr von Huppmann-Valbella, who was born in Olesko, now Ukraine, and of Katharina Seemann/Seeman, who was born in St. Petersburg, Russia. Through their great-grandfather, Igor and Grichka are the great-great-great-great-grandchildren of Leopold Vilém Kolovrat-Krakowský-Liebsteinsky, who was supreme Czech-Austrian Chancellor, First Minister of State, and Conference Minister, and of his wife Maria Theresia von Khevenhüller-Metsch, who came from a noble Austrian family.