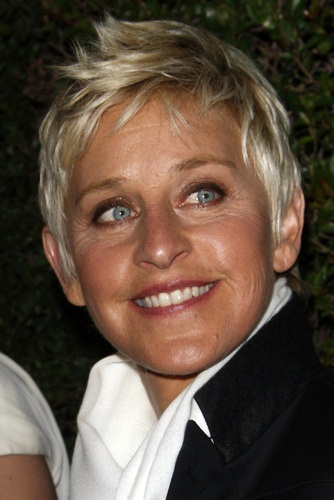 Ellen DeGeneres is an American comedian, television host, actress, writer, and producer. She has hosted The Ellen DeGeneres Show since 2003. She voiced Dory in the films Finding Nemo and Finding Dory.

Ellen is the daughter of Elizabeth Jane (Pfeffer) and Elliott Everett DeGeneres. Her surname, DeGeneres, is of French origin, and her ancestry includes Cajun/French, English, Irish, German, and distant Dutch and Swiss-German. Ellen is married to Australian actress Portia de Rossi.

Ellen’s patrilineal line can be traced back to Jean Baptiste DeGeneres, who was born, c. 1691, in Toulouse, Haute-Garonne, France. Jean Baptiste immigrated to Haiti.

Ellen’s paternal grandfather was Elliott Everett DeGeneres (the son of Alfred George DeGeneres and Julia E./G. Bellieu). Elliott was born in Mississippi. Alfred was the son of Joseph Constantine DeGeneres and Mary E. Whittemore. Julia was the daughter of John Sargent Billiu and Mary Frances Williams.

Genealogies of Ellen DeGeneres (focusing on her father’s side) – http://worldconnect.rootsweb.ancestry.com
http://www.famouskin.com