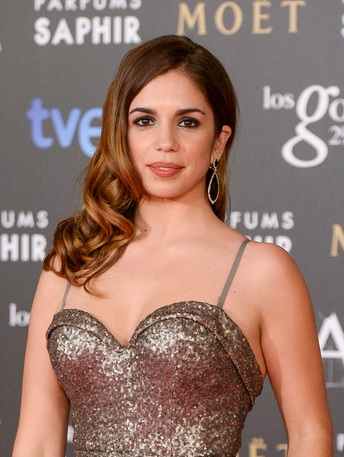 Elena Furiase is a Spanish actress. She is the daughter of actress and singer Lolita Flores (María Dolores González Flores) and producer and entrepreneur Guillermo Furiase, and a granddaughter of entertainer El Pescaílla and actress, singer, and dancer Lola Flores. Her father is Argentinian, and has Italian ancestry. Her mother, who is Spanish, is of Romani and Spanish descent. Her first cousin is actress Alba Flores.

When asked to what degree she is of Argentinian and Romani ancestry, Elena stated:

Half, half. My Argentinian family is descended from Italian immigrants. From them I got the family protection, the taste for meat and pasta. The Romani part is in the art, I enjoy rumba and flamenco, my family, and the little things. I love Latin America and feel happy there.

A picture of Elena’s mother’s family can be seen here.

Elena’s maternal grandmother was Lola Flores (María Dolores “Lola” Flores Ruiz, the daughter of Pedro Flores Pinto and Rosario Ruiz Rodríguez). Lola was born in Jerez de la Frontera, Cádiz. She is sometimes said to have had Romani ancestry through her own maternal grandfather. It is not clear if this is accurate. She is also described as having been of only Spanish descent. Pedro was born in La Palma del Condado, Huelva, the son of Juan Flores and Dolores Pinto. Rosario was born in Sanlúcar de Barrameda, Cádiz, the daughter of Manuel Ruiz Dorado, a man of possibly Romani descent, and of María Rodríguez Misa.

Sources: Genealogy of Elena’s mother (through her own brother) – https://www.familysearch.org