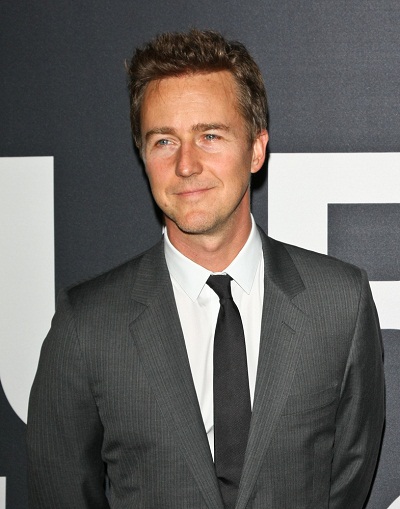 Ethnicity: English, as well as smaller amounts of German, Scots-Irish/Northern Irish, and Swiss-German

Edward Norton is an American actor, filmmaker, and activist. He has starred in the films Primal Fear, American History X, Fight Club, and Birdman, among many others. For a time, he lived and worked in Osaka, Japan, and speaks Japanese.

Edward is the son of Lydia Robinson “Robin” (Rouse), a teacher of English, and Edward Mower Norton, Jr., an environmental lawyer, conservation advocate, and federal prosecutor. His grandfather, James Rouse, was an urban planner, real estate developer, civic activist, and philanthropist. James founded The Rouse Company, developed the city of Columbia, Maryland (where Edward grew up), and also helped develop Boston’s Quincy Market, Baltimore’s Inner Harbor, and Norfolk’s Waterside Festival Marketplace. Edward is married to Canadian film producer Shauna Robertson, with whom he has a son.

Edward has English, as well as smaller amounts of German, Scots-Irish/Northern Irish, and Swiss-German, ancestry. He was raised an Episcopalian.

Edward’s patrilineal line can be traced to Thomas Frederick Norton, who was born, c. 1747, in London, England.

Genealogy of Edward’s paternal grandfather, Edward Mower Norton, Jr. (focusing on his own father’s side) – http://www.ancestry.com

Genealogy of Edward Norton (focusing on his mother’s side) – https://www.geni.com

History of the Norton family – http://www.nortonfamily.net