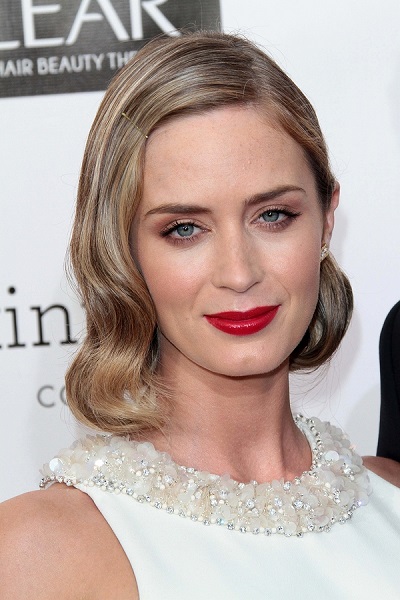 Blunt in 2013, photo by s_bukley/Bigstock.com

Emily Blunt is an English actress and singer. Her roles include My Summer of Love, Wind Chill, The Young Victoria, The Wolfman, Edge of Tomorrow, Sicario, The Girl on the Train, Jungle Cruise, and the A Quiet Place films, among other works. She also became a U.S. citizen in 2015.

Emily was born in Wandsworth, London. Her mother, Joanna Margaret (Dixon), is a teacher and actress, and her father, Oliver Simon Peter Blunt, is a barrister. Her uncle is Conservative Party, politician Crispin Blunt (Crispin Jeremy Rupert Blunt), who has been a Member of Parliament for Reigate, since 1 May, 1997. Emily is married to American actor and filmmaker John Krasinski, with whom she has two children. Her sister, Felicity Blunt, is married to American actor Stanley Tucci.

Emily’s paternal grandfather was Major-General Peter John Blunt, CB, MBE, GM (the son of Albert George Blunt and Claudia Mabel Wintle). Peter was born in Hartley Wintney, Hampshire, and was a British Army officer and businessperson. Albert was the son of Albert Blunt and Emily Emma. Claudia was the daughter of Harry Wintle and Gertrude Ellen Freeth.

Emily’s paternal grandmother was Adrienne Richardson (the daughter of Thomas William Richardson and Jessie May Clarke). Adrienne was born in Hartley Wintney, Hampshire. Thomas was the son of John Parkes Richardson. Jessie was the daughter of John Clarke.

Sources: Genealogy of Emily Blunt (focusing on her father’s side) – https://www.geni.com