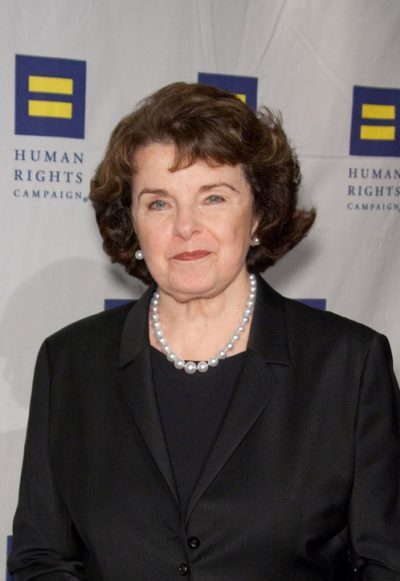 Feinstein in 2009, photo by Prphotos

Dianne Feinstein is an American politician. A member of the Democratic Party, she has served as a U.S. Senator from California, since November 4, 1992. She was previously Mayor of San Francisco, from December 4, 1978 to January 8, 1988, among many other duties.

Dianne is the daughter of Betty (Rosenburg/Rosenberg) and Leon Goldman. Dianne’s father was born in California, to a Polish Jewish father and a Russian Jewish mother. Dianne’s mother was born in St. Petersburg, Russia, and was of the Russian Orthodox (Christian) religion. It is not clear exactly what Dianne’s mother’s ancestry was. She may have had Russian, German and/or Jewish ancestry.

Dianne identifies as Jewish by religion.

Dianne’s paternal grandmother was Lillie/Lilly Kalfin/Kalvin (the daughter of Hershel David Kalfin and Chaya Sura). Lillie was born in Russia, to parents from Germany.

Sources: Genealogies of Dianne Feinstein (focusing on her father’s side) – http://freepages.genealogy.rootsweb.ancestry.com
https://www.geni.com