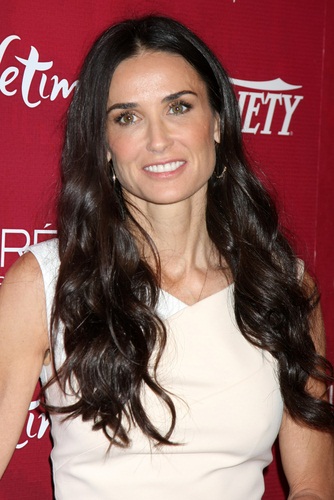 Demi Moore is an American actress, model, filmmaker, and songwriter.

Demi’s biological father was Charles Foster Harmon, Sr., who had left Demi’s mother, Beverley/Beverly Virginia (King), before Demi was born. Demi was raised by her mother and stepfather, Dan Guynes. Demi has three children with her former husband, actor Bruce Willis, including actress Rumer Willis. Her surname is from her first husband, musician Freddy Moore.

Most of Demi’s recent ancestors were born in the U.S. (specifically, for the most part, the American South), with many of her traceable foreign-born ancestors being English and Scottish.

Demi is a follower of Kabbalah.

Demi’s maternal grandfather was William Marshall King (the son of Edward McDowell “Mack” King and Blanche Campbell). William was born in Texas or Oklahoma. Blanche was the daughter of John Alexander Campbell and Betty LaVelle Carr.

Demi’s maternal grandmother was Elizabeth Marie Metcalf (the daughter of John Carrol Metcalf and Effie May Graves). Elizabeth was born in New Mexico. John was the son of Warner William Metcalf, Jr. and Martha Catherine Gunn. Effie was the daughter of George Aaron Graves and Elizabeth “Bettie” Childers.

Sources: Genealogies of Demi Moore (focusing on her mother’s side) – http://worldconnect.rootsweb.ancestry.com
http://gw.geneanet.org