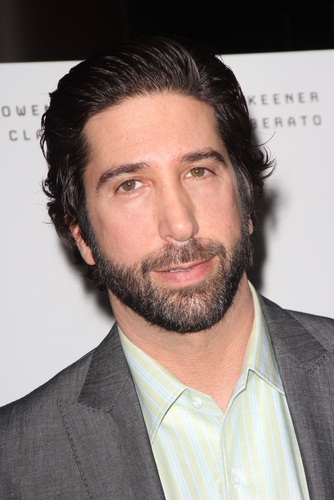 David Schwimmer is an American actor, director, and producer. He was one of the stars of the comedy series Friends.

His parents, Arlene Coleman and Arthur Schwimmer, are both Jewish (they descend from Jewish emigrants from Ukraine, Austria, Russia, Germany, and Belarus). He has a daughter with his wife, British artist and photographer Zoë Buckman. Zoë is also of Jewish heritage.

David’s paternal grandfather was Bertram Schwimmer (the son of Louis Schwimmer and Rose Scherusky). Betram was born in New York. Louis was a Jewish emigrant, from Sambir, L’vivs’ka Oblast, Ukraine, and the son of Austrian Jews, Nathan Schwimmer and Rebecca Klein. Rose was a Russian Jewish immigrant.

David’s paternal grandmother was Beatrice P. Osgood (the daughter of David Maxwell Osgood and Rose “Rosie” Grant). Beatrice was born in New York. David was born in Massachusetts, to Jewish parents from either Germany or Russia. Rose was born in Liverpool, Merseyside, England, to a German Jewish father, Harry Grant, and a Russian Jewish mother, Katharina “Katie.”

David’s maternal grandfather was Max S. Colman (the son of Abraham Colman and Sarah Kramer). Abraham and Sarah were Jewish emigrants from the Russian Empire.

David’s maternal grandmother was Syd Sherman (the daughter of Jacob Sherman and Rebecca Jaffe). Jacob and Rebecca were Jewish emigrants from Minsk, Belarus.

Genealogy of David Schwimmer (focusing on his father’s side) – http://wc.rootsweb.ancestry.com