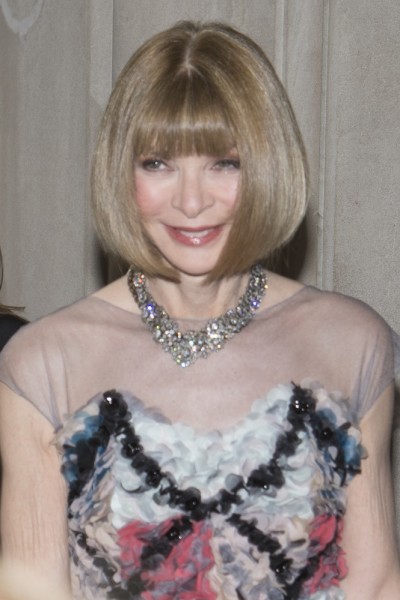 Wintour in 2014, photo by Prphotos

Anna Wintour is an English fashion journalist and editor. She is the editor-in-chief of American Vogue.

Anna was born in London, England, to Eleanor Trego (Baker), who was American, from Pennsylvania, and Charles Vere Wintour, a newspaper editor. Among her siblings is journalist Patrick Wintour. Both of her parents had English and Scottish ancestry. Her mother also had distant Dutch and remote French Huguenot roots. Her stepmother is magazine editor Audrey Slaughter, who founded publications Honey and Petticoat.

Anna’s paternal grandmother was Alice Jane Blanche Foster (the daughter of John Frederic Foster and Caroline Bagshawe). John was the son of Frederick William Foster, who was born in St. Elizabeth, Jamaica, and of Anna Louisa Eleanora La Trobe, who was born in New York, and whose own father was English. Caroline was the daughter of Sir William Chambers Darling/Bagshawe and Helen Ridgard. Late 18th century novelist Lady Elizabeth Foster, Duchess of Devonshire, was Anna’s great-great-great-grandmother, and Sir Augustus Vere Foster, the last Baronet of that name, was a great-uncle.

Anna’s maternal grandfather was Ralph Jackson Baker (the son of James Eugene Baker and Mary Emma McIntire). Ralph was born in Pennsylvania, and was a Harvard Law professor.

Anna’s maternal grandmother was Anna Elizabeth Gilkyson (the daughter of Hamilton Henry Gilkyson and Nellie Henry Trego). Anna’s grandmother Anna Gilkyson was born in Pennsylvania. Hamilton was a merchant from Pennsylvania, and was the son of James Gilkyson and Anna Henry. The Trego surname goes back to a French Huguenot immigrant of the 1600s, Peter Trego.