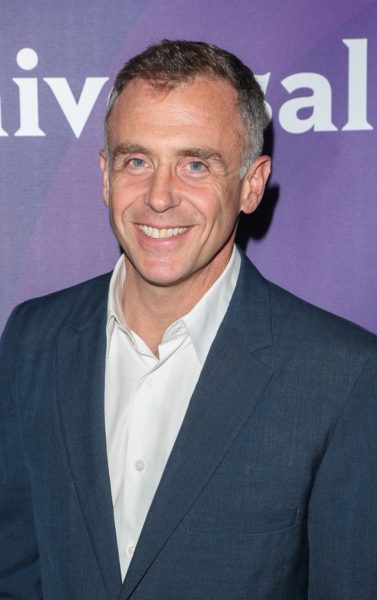 David Eigenberg is an American actor. He is known for his roles on the series Chicago Fire and Sex and the City.

David is the son of Beverly and Harry Eigenberg. He has described himself as “half-Jewish.” David’s father was Jewish, the son of Polish Jewish parents. David’s mother has English, as well as German and Irish, ancestry. David was raised in his mother’s Episcopalian faith.

David is married to Chrysti, with whom he has two children.

David’s paternal grandfather was Mendel/Max Ejgenberg/Eigenberg (the son of Abraham Ejgenberg and Ester Sura Dluganoga). Mendel was born in Warsaw. Abraham was the son of Lejbus Ejgenberg and Perla Gwiazda. Ester was the daughter of Aron Josek Dluganoga and Bajla Nicha Szklarczyk.

David’s paternal grandmother was named Chaje/Chaya Helen Treistman (the daughter of Avraham Josef “Joseph” Trajstman and Pesa “Pauline”). Chaya was born in Warsaw. Avraham was the son of Israel Shabtai Treistman. Pesa was the daughter of Moshe.

David’s maternal grandfather was Robert Morrell Goodman (the son of Robert Roy Goodman and Frances Elizabeth Easto). David’s grandfather Robert was born in New York. David’s great-grandfather Robert was the son of Joseph M. Goodman, whose parents were English, from Somerset, and of Harriet Hemsley/Eamsley, who was born in St. Catharines, Ontario, Canada, to English parents. Frances was the daughter of English parents, Alfred E. Easto, from Southwark St Saviour, Surrey, and Louisa Parker, from Leicester, Leicestershire.

David’s maternal grandmother was Phyllis Myrtle Kolb (the daughter of Thomas Phillip Kolb and Margaret Maher). Phyllis was born in New Jersey, and had German and Irish ancestry.

Genealogy of David Eigenberg (focusing on his father’s side) – https://www.geni.com